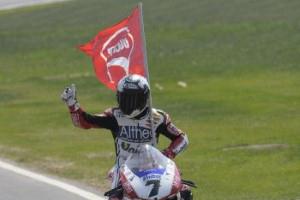 The Ducati Desmosedici GP12 has received a lot of attention recently, mainly because the bike seems to have been developed at the last minute. Ducati is behind their normal schedule for testing bikes, and the model wasn't ready to debut at their recent Wrooom event in Italy, where journalists traditionally see the motorcycle for the first time.

In fact, next week's test at Sepang will be the first time Valentino Rossi and Nicky Hayden will ride the bike. However, another famous rider is getting his turn on the new model first. With Hayden and Rossi at Wrooom, the team has called in World Superbike champion Carlos Checa to take the model for a spin at Jerez before the Sepang test.

Checa rode the bike for several hours and gave feedback to Ducati engineers, who are still fine-tuning the bike before the first test. The Spanish racer took to Twitter after the ride, but couldn't say anything specific about the bike.

"1st test this year recovering good feelings on bike, we are working well," he wrote. "I can't say so much, tomorrow more work. Ciao!"

Ducati boss Filippo Prezioso says that the GP12 features 90 percent different motorcycle parts than the GP11. Normally, developing a bike like this would take two years, but Ducati is attempting to do so within a few months.