There is something to be said about being late to a party. All eyes are on you when you walk in the door. And that's the point.

Harley-Davidson announced two new models for 2016. The introductions may seem to be a bit late. But both bikes seem to be making quite an impression. 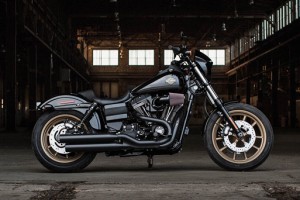 The popular Harley Low Rider gets a "S" designation to join the Fat Boy S and Softail Slim S. The S series brings more performance and a little different styling to the Harley bikes.

The increased performance starts with an engine that has a little more kick to it, plus upgrades to the suspension and brakes.

The Low Rider S comes with the Screamin' Eagle Twin Cam 110 engine, which produces 115 foot-pounds of peak torque at 3500 rpm, a 13 percent increase from the standard Low Rider version, according to Cycle World. It's also equipped with a heavy-duty clutch to ensure smooth shifting and an even transfer of power.

Riders will notice they sit tall on the Low Rider S. The single saddle is positioned low while the flat bar is attached to 5.5-inch risers, promoting an upright riding position. To compensate, riders are protected from the wind with a speed screen.

"When you ride fast in this upright position, you need a little wind protection," Harley-Davidson Senior Stylist Dais Nagao said, according to Cycle World. "Then the way we inset the headlamp deeper into the speed screen gives the Low Rider S an aggressive face. It's a powerful way to communicate the personality of the motorcycle."

The suspension also gets a bit of an upgrade from a stock Low Rider. The rear shocks are nitrogen-gas charged, while up front is a cartridge fork. The triple disc brakes feature two floating discs on the front wheel - instead of just one - and come with ABS standard.

The only finish available is black, with gold-finished cast-aluminum wheels. MSRP according to Harley-Davidson starts at $16,699. 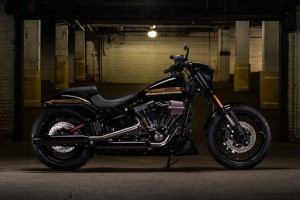 The CVO Pro Street Breakout comes out of Harley's Custom Vehicle Operations division as a limited production model that evokes a drag-racing spirit.

A motorcycle with this kind of power can deliver a harsh ride. But not this one. The bike is equipped with a hydraulic Assist & Slip clutch and a 6-speed Cruise Drive transmission. Harley-Davidson says riders get the power on the low end with a smooth transfer of power through the top end.

The Breakout's front end features a 43 mm inverted fork and 19-inch front wheel that enhances agility. Like the Low Rider S, it also gets two disc brake rotors on the front instead of just one, and ABS comes standard.

Perhaps what's most striking is the look. The Breakout comes with a base satin black finish with satin chrome-finished pipes and what Harley calls scorched chrome finish wheels.

"The Pro Street Breakout represents a new dimension of CVO motorcycles," Harley-Davidson Styling Director Brad Richards said in Motorcycle News. "The Pro Street Breakout takes its cues from the streets and reflects our own changing tastes. It still delivers the depth of detail and value and the bragging rights the CVO customer expects, but gets there in a different way. Its colours may be subdued but also have incredible depth. We're developing alternate finishes to bright chrome brushed and anodized surfaces and tinted clear-coat, for example. The Breakout really lent itself to this new styling direction."