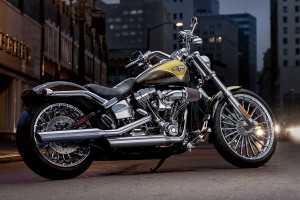 I have an affinity for classic styling, and the CVO Breakout fits that niche quite nicely.[/caption]

Sure, there are loads of different motorcycles on the market that are pretty great, but there's something about a custom ride that just puts it above and beyond the rest - and Harley has taken this niche market to a new level with the Custom Vehicle Operations (CVO) lineup. Since 1999, H-D has been putting out a limited lineup of motorcycles that are customized versions of bikes in in the current family of new motorcycles. These bikes get better paint jobs, more powerful engines and plenty of other upgrades that make them serious head-turners.

In an ideal world, we'd all probably like to personalize our bikes and add our own motorcycle accessories to our rides, but that can get really expensive, especially if you're paying someone else to do it for you. So what Harley does is create a line of models that are already customized so you don't have to do any work to get your bike to stand out from the pack. This year, there are four different H-D CVOs - the Road Glide, Road King, Ultra Classic Electra Glide and, my personal favorite, the Breakout.

While each has its own unique features, Harley was kind enough to equip every model with the Screamin' Eagle Twin Cam 110 engine - the most powerful motor Harley makes. They've also each got ABS and keyless ignition, which is always a plus in my book. The Breakout Softail is the only bike in this year's CVO lineup that is not available in a 110th anniversary edition. But that's OK because its styling more than makes up for it. 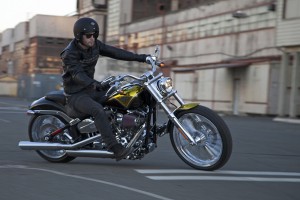 Harley has taken the custom bike market to a new level with the Custom Vehicle Operations (CVO) lineup.[/caption]

If you follow my blog, you know I have an affinity for classic styling, and the CVO Breakout fits that niche quite nicely. While I appreciate touring motorcycles, the other CVOs just don't compare to the beauty of the Breakout. There's so much chrome on this bike, it's almost blinding, and the parts that are painted - the gas tank and the fenders - are covered with 10 coats of colors called Hard Candy Gold Dust and Liquid Sun with Pagan Gold. I couldn't possibly describe the colors any better than their names already do. The wheel design on the Breakout is completely custom too, and the chrome spokes are styled to be quite eye-catching. I'm adding this bike to my Motorcycle Wish List.