As one of the largest powersports retailers in the country, Chaparral Motorsports sells thousands of ATV tires a year. And with those sales often come a lot of questions from the purchaser, the one question we get asked most often though is "what is the best ATV tire?" That's really a tough question to answer because it depends on several factors such as the type of terrain you typically ride, what you are looking for when you want "the best tire" and what features are important to you in regards to how well a tire performs i.e. can it stop fast, does is climb well, can it handle mud?

In order to answer the question "what's the best ATV tire" we have to ask the customer several questions in return before we can suggest some tire options that will suit their wants and desires. Over time we've learned that not ATV riders are looking for the same thing in a tire. So we decided to do some testing with a bunch of ATV tires to show how each tire performs at specific tasks and created the Chaparral Motorsports 25" ATV Tire Shootout. 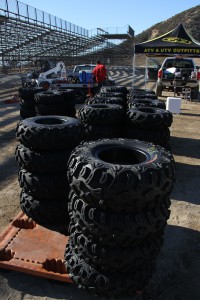 The purpose of the shootout was to pit 21 of the most popular ATV tires we sell head-to-head in a variety of challenges to see which tires performed best in each setting. The vehicle we used was a 2017 Yamaha Kodiak 700. We captured each tire test with a mix of video and still photography so that we could then thoroughly document and show viewers how each tire performed during testing. The five tests we came up with for the shootout were designed to mimic real world scenarios that riders would typically experience. They are as follows:

Just like the tractor pull competitions you might have seen on TV, this test was designed to see how much weight the ATV tires could handle in a pulling type scenario before breaking loose and just digging into the ground without making any more forward momentum. It turns out the sleds used in sled pull competitions are rather pricey, therefore we utilized some ingenuity and materials we had around the Chaparral facility to build our own sled. We used and watercraft testing tank and the main component, added a skid to the bottom front and an axle to the rear. 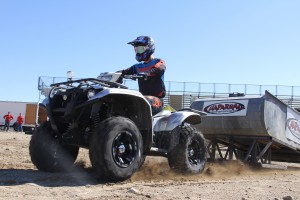 On top of the tank we rigged up a sliding rack weighted with sand bags and 5 gallon utility jugs filled with water. The rack was connected to winch mounted to the front of the tank. Once switched on, the winch would pull the weight forward thus continually increasing the weight on the skid as the rack moved closer to the front of the tank. The entire contraption weighed more than 3,000lbs. With the rack at the rear of the sled the weight at the skid was about 380lbs. As the rack climbed up the tank the weight increased to 500lbs after 4 seconds of run time, 900 lbs after 9 seconds, and then maxed out our scale at more than 1,000lbs after 12 seconds of run time. The tires were judged on how far they could pull and at what time/weight they stopped gaining forward momentum. 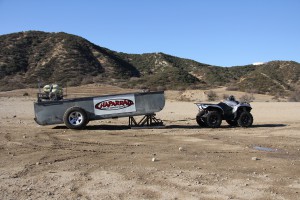 This test was performed on a rather steep incline that is part of the REM course at Glen Helen Raceway. Aside from being a steep grade, the dirt was quite soft and loamy. 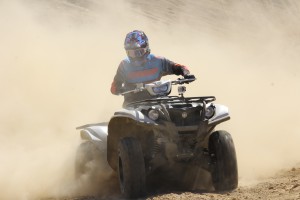 The rider started at the base of the hill and a soon as the timer gave the ok signal the rider would pin the throttle and head straight up the hill. The climb was approximately 245 feet from the base to the top. The tires were judged on how long it took them to crest the top of the hill. Not all the tires were successful in this test.

In this test, the rider started at the top of the hill climb and then coasted down 100 feet before slamming on both the front and rear brakes. The tires were judged on how long it took the quad to come to a complete stop once the brakes were applied. 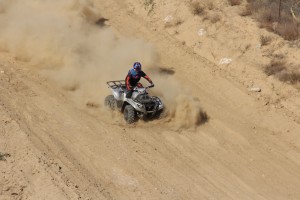 In this test the rider gunned the ATV at full speed for 1/8th of a mile and then applied the front and rear brakes. As soon as the rider crossed the braking line the stop watch was started and then stopped once the vehicle came to a complete stop. 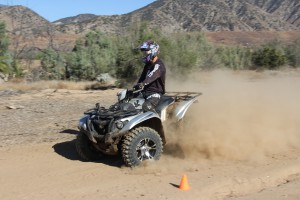 This test was a challenge for us in the fact that it rarely rains in Southern California, so finding a good mud pit we could test tires in was rather difficult. We ended up creating our own 95-foot long mud bog with the help of a backhoe and lots and lots of water. We ended up with a very nice mud pit that was just wider than the Kodiak and had some great mud that was about 2 feet deep. 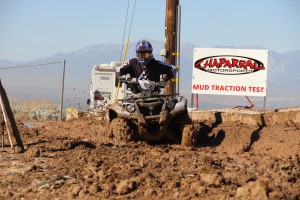 You can check out the video below and watch how each test was performed. In the next few days we will be uploading a results article and video to our YouTube page highlighting the Top 8 Best Overall Performing Tires in the shootout and then we will follow that up with an article and video which will break down each test and showcase The Best Tires for Specific Tasks.