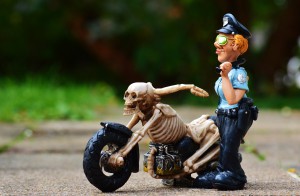 Last month we posted an article about motorcycle theft prevention, and in that article it talked about the 6% decline in US motorcycle thefts from 2013-2014. Yesterday the National Insurance Crime Bureau (NICB) posted its report for 2014-2015 and it shows we've taken a turn for the worse with a 6% increase in thefts. A total of 45,555 motorcycles were reported stolen in 2015 versus 42,856 in 2014. The bright side (if there is one when it comes to stolen motorcycles) is that even with this 6% increase we have experienced a 32% decline in thefts since 2006 when 66,774 bikes were stolen.

In categories such as: states with most motorcycle stolen, cities with most motorcycles stolen, manufacturers with most motorcycle stolen, and months with the most/least amount of thefts, much of the information (other than the figures for the number of bikes stolen) is the same from 2014/2105. There are a few fluctuations with states and cities changing positions in these categories, but the constant is the majority of motorcycles are stolen in the summer months, notably August and fewer bikes are stolen in the winter months, notably February. Obviously this bit of info makes sense as those are the times when most people bring their bikes out or store them away.

The interesting thing is that for 2014 motorcycle unit sales were at 483,526, up 3.8% (according to the Motorcycle Industry Council) from the year prior, even though thefts were down 6%. While we were unable to track down final motorcycle unit sales numbers for 2015, what we did find was that as of the third quarter of 2015, total motorcycle sales were at 413,128, a 4.7% increase compared to the same period last year, but now motorcycle thefts have completely swung the in the opposite direction.


For those that didn't read last month's article here a reprint of our tips on how you can help keep your motorcycle safe.


What Can You Do?