When Star Motorcycles introduced the Star Bolt several years ago, the new model ticked off a lot of boxes on many motorcyclists' wants and desires lists. The bike is nimble, lightweight, has great modern styling, and is easy for beginners to ride yet offers enough pep and aggression to keep veteran riders thoroughly entertained.

The two greatest features of the Bolt however go directly hand-in-hand; it's an extremely affordable bike and can easily be customized into just about any style of motorcycle and will still look awesome. With a MSRP under $8,000, purchasing a Bolt motorcycle leaves a lot of extra cash left over for customization, and while it looks great in its stock form, the Bolt begs for attention in the form of performance upgrades, aftermarket parts, and personalization.

If you got your hands on our inaugural edition of TWM you'll recall the Stepson Of Anarchy article which featured a Bolt R-Spec that we tweaked into a club style bike. Well, we dipped back into our pool of stock Bolts and this time decided to stir up some dust by building a custom scrambler.

Our plan for this project was to give a Bolt the retro scrambler look that has become popular again, but do it with bolt-on components so that just about anyone could give their Bolt similar style if they so desired. Of course in order to properly achieve this goal it required some initial designing, mock-up, and tweaking by the ChapMoto Mod squad.

Back in the nether regions of our facility is the R&D and fabrication department. Armed with a full supply of raw materials and an arsenal of cutting, bending, and welding equipment, our in-house fabricator was left to his own devices to create a sub-frame that would set the tone for the entire scrambler build. It took a few iterations but he finally nailed down a design that fit the style and met the bosses' approval.

The sub-frame was crafted out of 1" OD steel tubing and features a mix of 1" wide and 2" wide flat stock steel for bracing and mounting. With the stock seat, fender rails, and rear fender removed the sub-frame bolts right in place utilizing much of the stock hardware and mounting holes. Whereas the stock seat sets the rider down low for that "in the bike" feeling, the new sub-frame raises the seating position by about 4-1/2" so the rider is on top of the bike for a more offroad oriented riding position. Also, rather than being tucked into the bike, the flat seating surface of the sub-frame gives the rider room to move forward or backward as needed when attacking the terrain.

At the front of the bike the fork legs were dropped out from the triple trees to allow for a set of Star Motorcycles Fork Boots to be installed. The fork boots are one of those accessories that are rather easy to install but make a big difference in the styling department. Lighting up front was also addressed. The stock turn signals and headlight are rather obtrusive so we swapped the turn signals out with a set of miniscule Lockhart Phillips Short Stock Marker Lights. We mounted the front turn signals to the fork legs with a pair of chrome Kuryakyn 39mm/41mm P-clamps. As for the headlight, we picked up a set of MC Enterprise's Headlight Brackets and a 5-3/4" side mount headlight. The brackets were secured around the fork legs and the headlight was mounted in between them. The assembly flows really nicely with the retro look.

The Bolt comes with black mag wheels which look great but we felt that a set of spoke wheels were more befitting for the scrambler look. Up front we used a Ride Wright 19x3" wheel and out back we installed a matching 17x3.5" wheel. Both wheels were wrapped in Continental's TKC80 tires. DOT approved and designed for 40% on road and 60% offroad, the TKC80s offer good dirt/mud traction with their knobby profile but still deliver solid grip on paved surfaces. The stock rotors wouldn't mount up to the new wheels so we used a set of Twin Power Mesh rotors, which matched up with the spoked wheels perfectly.

We went full old school dirt bike/BMX style in the handlebar department by installing a set of Biltwell 1" Moto bars. With their short rise and cross bar the handlebars were a great addition to further emphasize the intended nature of this bike. We reused the stock controls, but did ditch the OE grips for a set of Biltwell Thruster Grips. Down below the stock controls were left in place, but the footpegs were tossed aside and a set of Works Connection Wide pegs were modified so that they could be bolted onto the stock peg mounts. The new pegs add much more bite and should help the rider maintain solid placement of their feet when offroading.

As you can tell in these photos the stock Bolt tank was left intact. The stock tank has a nice shape to it and is compact enough that it flows well with the new lines of the bike. Over the front tire, the fender was eliminated and in its place a fork brace was installed. The raw aluminum fork brace was custom made in-house and gives the front of the bike a more aggressive look. To help protect the engine from rocks and flying debris when "scrambling" we installed a custom skid plate that was fabricated in-house as well. At the rear of the bike a Low Brow Customs Manta Ray fender was trimmed down and then mounted in place. The tail end of the fender mounts to the underside of the rear of the sub-frame while the front section mounts to the original fender mounts behind the battery tray.

A simple seat base was cut out of Â¼" thick plastic and shaped to match the lines of the sub-frame. The stock seat mount bracket was re-used so that the new seat will slide and lock in place like the original. The base was covered in heavy duty foam to provide a comfortable cushion and then it was wrapped in black vinyl with split stitching for a vintage look.

The engine was left in its stock form however, the original intake and muffler were replaced with components from Kuryakyn and Vance and Hines. The velocity stack Velociraptor intake kit from Kuryakyn helps give the bike a sportier look and the black finish against the chrome wire mesh filter cover looks really sharp. Installing the Vance and Hines Comp Series muffler saved a lot of weight, as the stock muffler and accompanying mounting bracket is extremely heavy. The V&H unit mounted in place with ease and significantly improved the sound with a nice throaty rumble. To ensure the bike was properly tuned with the new intake kit and muffler, a Vance and Hines Fuel Pak was installed. The Fuel Pak plugs in-line with the factory wiring harness and can easily be programmed to dial in the fuel map settings.

The piece de resistance of this scrambler build was the paint job. Since this was a retro style bike we figured what better way to emphasize the look than with a throwback style paint scheme. Coincidentally, Yamaha is celebrating its 60th anniversary this year and to commemorate the milestone brought back the classic yellow basecoat with black and white film strip/speed bar style graphics. It's a great combination and looks really stylish together and we thought it would really set our Scrambler apart. Our in-house graphic designer created the speed stripe graphic but tweaked it ever so slightly by putting the white stripes at a slightly forward slant. It's very subtle but helps evoke a feeling of forward movement. We handed the gas tank and rear fender over to a local painter to spray them both in Yamaha yellow. Then once the paint on the tank was dry the graphic was laid across the bottom edge and then several coats of clear coat were applied.

Overall we were really pleased with how our scrambler, aka The Scrambled Egg, turned out. We were able to achieve our goal of building a bike that others could easily replicate and we have had quite a few people call and ask for items like the sub-frame and fork brace. Once again the Bolt has proven that it's a very versatile platform and can easily be transformed into just about any style of custom motorcycle and will still look good. 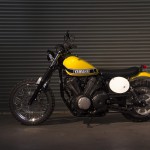 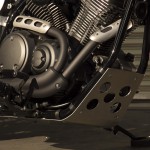 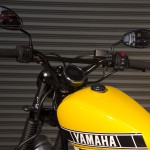 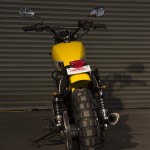 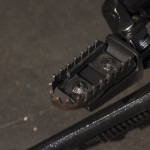 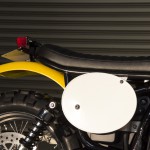 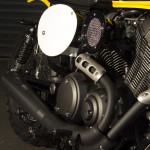 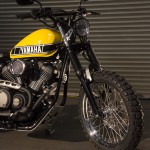 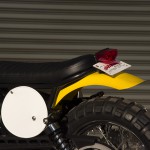