The Stepson Of Anarchy: Chaparral Motorsports' Battle Of The Bolts Build 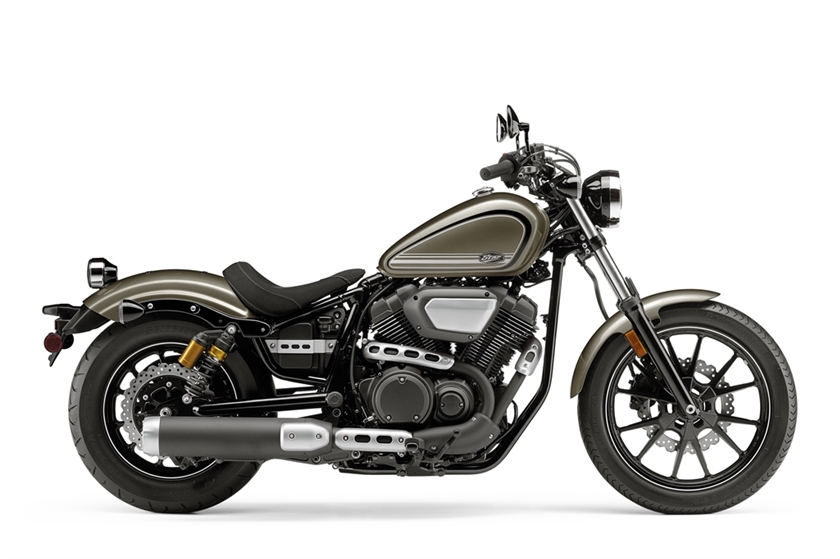 This past fall, Star Motorcycles held a contest called Battle of the Bolts, in which Star Motorcycle dealers had the opportunity customize a stock Bolt or Bolt R-spec for a chance to win big prizes. The rules were pretty straight forward, basically you had to use at least $750 worth of Star parts and accessories, you had to use the stock sheetmetal and suspension (although it could be modified), and you couldn't cut or modify the frame.

We decided to throw our hat in the ring and use one of our floor model R-Specs as the entry. Our plan was to create our Bolt Build along the lines of the club style. While we aren't part of any outlaw clubs - a few employees are members of the Chaparral Rider's Club (not quite outlaws other than exceeding the speed limit every now and then) - we do like, and appreciate this type of bike and felt that the stock Bolt R-Spec could easily be massaged to fit this style perfectly. Conveniently, many of the Star Bolt parts and accessories made this an easy process.

For the uninitiated you may hear "club style" and immediately think of skin tight neon shirts and mind-numbing bass lines. Or, if you're a relative new comer to the custom motorcycle world you might be one of the millions of people who've watched Sons of Anarchy and think that Jax and the rest of the boys were the originators of blacked-out, two-wheeled, menace-machines with tall handlebars and mini fairings. Nope, not even close. There were tougher, scarier, and more importantly, real guys running that style of bike well before the SAMCROs were pecking around Charming.

Lean, mean, and sinister, the club style motorcycle is all about getting where you need to be, or away from where you were, as quickly and stealthily as possible. The bikes need to be agile, nimble, and able to split lanes and take names when things get heated. Totally utilitarian, this style is all about function and performance. From the mini fairing and tall handlebars to the high-flow air cleaner and two-into-one exhaust, every part has a purpose. Even the all-black or mostly black color scheme serves a purpose-to look like a dark blur as it speeds by and to blend in with all the other black motorcycles on the road so that the bike/rider are harder to single out or identify.

Of course we wanted to follow in line with the typical club bike and beef up the motor by increasing the displacement on our Bolt but that brought up concerns of potential warranty issues down the line (we still planned on selling the bike off our sales floor when we were done customizing it), so we considered some lighter performance upgrades for the engine instead.

Working to meet the requirement that a minimum of $750 worth of Star Motorcycle accessories be included in the build, our first order of business for our build was to add some additional seating.

Installing two-up seating isn't exactly the first thing you might expect someone to do on a club bike, but a sissybar and passenger seat serve more purpose than just a place for someone else to sit. These two items can come in very handy when going on a quick weekend run, providing a spot to strap a small travel bag and sleeping bag. Plus, you never know when you'll come across a cute hitchhiker along the roadside.

You'll find ape hangers are commonly used on bobber and chopper style custom bikes but when we saw the Mini Apes on the Star Accessories website we really liked their modern take on the classic ape hanger handlebar and thought they'd look great on our Stepson of Anarchy bike.

With a very mild rise the Mini Apes are accentuated by an aggressive design that trades sweeping round bends at the top for hard angles and slash cuts. We felt these bars would look great peeking out from behind the mini faring. With about 4 inches of rise, the new handlebars required longer brake, clutch, and throttle cables so we ordered the Stainless Braided steel units from the Star Accessories website. Sized perfectly for the new bars, these cables made the installation a snap, and by simply rerouting the hand control switch wiring from in front of the neck to behind the neck, it freed up enough slack for the stock wiring to work with the taller bars.

Of course we had to install the Star Accessories Mini Fairing - no club style bike would be complete without one. A mix of style and functionality, the mini fairing definitely gave the bike a heavy dose of attitude. The black fairing body helped break up all the matte grey paint on the bike and we came up with an idea to address the clear windscreen.

Up front we also added a bit of old school MX style with Star Accessories Fork Gaiters. The decision to install the fork gaiters was a combination of form and function as the gaiters helped cover up the shiny areas of the lower fork legs between the sliders and the lower triple clamps with black rubber. They also protect those areas from rocks and flying debris that could cause pitting, nicks, and dust/debris from slipping down in the lower legs and possibly damaging the fork seals.

Next, we removed the rear fender and cleaned up the back a little bit by installing the Fender Eliminator for the Star Bolt. The fender eliminator pulled the turn signals off the fender side rails and placed them at the license mount for a cleaner look.

We got our hands on one of Vance and Hines' VO2 Naked Intake kits and Competition Series Muffler, and felt they were a perfect fit for the look and performance of our club style Bolt. The billet, dual venturi intake of the VO2 kit looks good on its own and if we weren't worried about diminished performance and junk getting sucked into the motor and damaging the internals we would have run it with no filter. However, the blue hi-flow filter element that came with the kit is cool too and with no cover to hide the filter (hence the Naked Kit) it still gave it a raw, industrial look.

Covered in a high-temp black coating, the Competition Series muffler had a similar finish as the stock head pipes. Shorter and way lighter, the Comp Series Muffler is definitely a more performance oriented muffler compared to stock. The muffler slipped right into position and the matte gray inset tip matched up nicely with the stock heat shields.

According to V&H they've seen gains of up to 10hp/10ft-lb of torque with this muffler, the VO2 intake, and their FuelPak. We used a V&H FuelPak to get the air fuel ratio dialed in and the bike properly tuned so it would perform optimally with the new air filter and muffler.

Our Stepson of Anarchy project needed a little bit more style and protection, so we added some hand guards. While hand guards are commonly found on dirt bikes, dual sports, and the big adventure bikes, we've been seeing more and more people incorporating hand guards into their club style bikes. While others may find it odd to see a set of hand guards on a cruiser, they often match up pretty well with a mini faring. And for those of us in California where we can split lanes, hand guards offer some added protection for your hands when you accidentally clip someone's side mirror.

We picked up a set of Bark Busters' Storm hand guards which are specifically designed for street/cruiser motorcycles and will fit hollow end handlebars with internal diameter ends from 7/8 to 1 inch. The kit comes with plastic hand guards, a heavy-duty aluminum backbone, and all the mounting hardware. They also come with two sets of spacers which come in handy if you need to shift the guards one way or the other, or if you need additional spacing between the hand guard end and the end of your throttle sleeve.

When it came to paint we thought about a couple different paint schemes but ended up sticking with the stock paint since it already suited the style of bike we were going for, plus it would help keep the overall cost of bike down. While the gloss black fairing looked nice on the bike, we felt the clear wind screen kind of threw it off a bit. Then when we added the hand guards to the mix they were a slightly different color/finish of black than the fairing. With a mix of gloss black and matte black components we decided to help it all blend together a little better with a couple coats of Plasti Dip.

Plasti Dip is basically a rubberized paint in a spray can. When applied and dried it's similar to the rubberized coating you'll find on the end of some pliers. Available in a wide range of colors, you can use it on nearly any type of surface and best of all when you get tired of it or you want to change up colors, the stuff simply peels off-often times it can be pulled off in one single piece.

We sprayed the fairing, windscreen, and hand guards all in Matte Black Plasti Dip so that they would match up better with the other matte colored components like the exhaust and pin striping. The nice thing about using Plasti Dip is that it doesn't take much prep work; basically you just need to clean the surfaces of oils or grease. The stuff goes on just like spray paint. When applied it sort of has a light textured finish, like an egg shell, then when dry it smooth's out a bit. It's best to apply several coats as that makes it bit thicker and easier to peel off when removing.

All the mods we made to this bike were pretty straight forward and easy to do with basic hand tools-anyone could do this in their garage. While our Stepson of Anarchy bike didn't win the competition, we were pretty happy with how it turned out and felt it was a good representation of the style we were going for. Best of all, the bike didn't last very long on our sales floor. 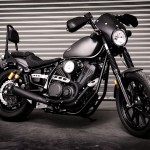 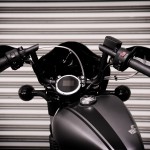 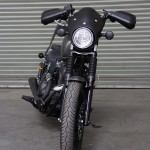 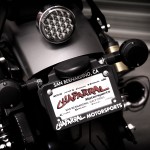 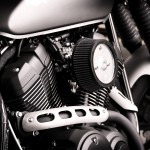 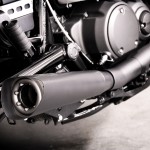 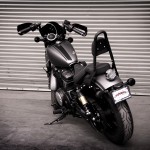 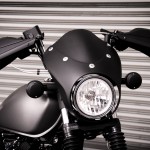 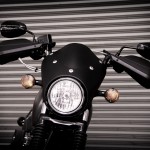 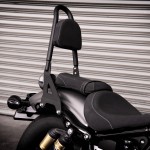