How To Deal With Motorcycle Road Rage: Part I 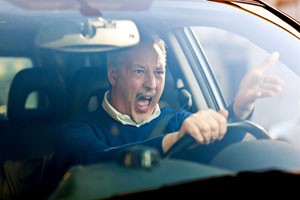 Maybe road rage happens against motorcyclists because they look fast, can get up ahead of traffic or because they're simply not in an enclosed vehicle, but angry drivers are everywhere.

The most difficult thing for motorcyclists is defusing the situation. It's never smart to get into an altercation with a person driving a four-wheeled vehicle because they could take their anger out on you with their car.

Videos appear online all the time of drivers getting insanely mad over a motorcyclist cutting off drivers or getting up ahead in traffic. Recently, a viral video of middle-aged man getting out of his car to attack a motorcyclist and his female passenger has accumulated more than 5 million views on YouTube.

The older man punches the motorcyclist in the head for cutting him off, and then the rider pulls the man to the ground to restrain him, while everything is caught on camera. It's a great example of how the motorcyclist demonstrated restraint by not fighting him the driver, but instead, holding him down until the police came.

Not all riders are lucky enough to go through relatively violent-free road rage incidents. If you've been riding long enough, you've likely been in some sort of altercation. This rider showed great restraint (pun not intended). After seeing some of the aftermath from other road rage incidents involving motorcyclists and automobile drivers things could have gone a lot worse for both parties. Kudos to the motorcycle rider for doing his best to defuse the situation without pummeling the driver. However, there are ways to defuse the situation and ensure your safety is maintained.

In this first installment of our two-part road rage series, here are a few tips on how to deal with road rage against motorcyclists:

The moment you see a driver get out of their car, it's best to either move on or be ready to take off. In the case of the viral video, it appears the driver is just going to confront the rider, before he suddenly starts throwing punches.

However, if the driver has some sort of weapon, you need to be ready to take off. If you have a passenger tell them to not leave the back of the bike and to be ready to go. At the same time, be extremely cautious as you're likely at a red light, and you don't want to take off into traffic. Simply move away from the attacker as best as possible.

While dealing with a violent driver is the worst-case scenario, a lot of prior actions can help defuse the situation before it escalates. You can do this by avoiding rude gestures if a driver honks at you or by steering clear of any verbal confrontation.

When people get angry on the road, they are most likely looking for any reason at all to escalate the situation. Road rage causes millions of drivers to think irrationally while behind the wheel, and you should do everything you can to not provoke drivers into a deeper rage. Be the smart person in the situation and consider your safety over anything else.

Whether it's your fault or not, the best course of action is to let it go. Don't get too upset over something you'd likely forget about by the end of the day if there was no altercation. Don't stare down drivers, as it will likely just increase their rage.

You'd be surprised how many people who are involved with serious road rage injuries simply wished they had let it go. If the person continues to follow you or create a dangerous situation, try your best to get away from the driver and call 911. Don't be a victim of road rage because you didn't call for the police to defuse the situation.

Stay tuned for our second list of tips in this two-part series!