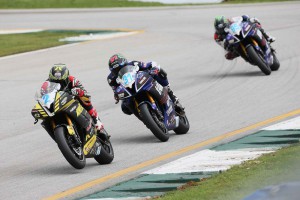 Wheels In Motion/Meen Motorsports teammates Josh Herrin and Joe Roberts are both hoping for bounce-back years after the trials and tribulations of their rocky 2014 seasons. Last weekend in the opening round of the 2015 MotoAmerica AMA/FIM North American Road Race Championship in Texas, the pair didn't get off to the fast start they were both hoping for and the rockiness continued. Today at Road Atlanta, they more than made up for it.

Herrin came out on top of a race-long battle with Yamalube/Y.E.S./Graves Motorsports Yamaha teammates Garrett Gerloff and JD Beach to win his first race since taking victory at New Jersey Motorsports Park in September of 2013 - during his AMA Superbike Championship-winning season. Last year Herrin went overseas to the Moto2 World Championship and his experience was such that he admits to not only wanting to come home halfway through the season but also not even caring if he rode a motorcycle again. That all changed this off-season when he not only gelled with his new Meen Motorsports team but was also reunited with a middleweight Yamaha R6 - the motorcycle on which he'd won all of his 15 AMA races.

"Just being able to come back, it's really important," Herrin said. "I know there was a lot of people doubting us. Daytona went good, but I know these guys weren't there and at COTA we were riding in the rain so this was our first dry race with all these guys. I thought it was really important for me to get the win just so I could have a strong year. I've been struggling a lot in practice this weekend trying to keep up with this guy (Gerloff), and I was getting real nervous right before the race, getting nauseous. I was just wondering if we were going to be able to keep the pace because we weren't very fast this morning in the dry. It kept me on my toes, but that's the first race I've ever been able to win from the front, I think, since New Jersey in 2009 with Jake Zemke. It feels good to be able to do that many laps in row by myself and have a good pace. I'm excited about it for sure."

Herrin beat Gerloff by just .428 of a second with Beach 3.2 seconds behind at the end of the 20 laps. Fourth and fifth in today's Supersport final went to M4 Suzuki's David Anthony and RoadRace Factory's Tomas Puerta, respectively. 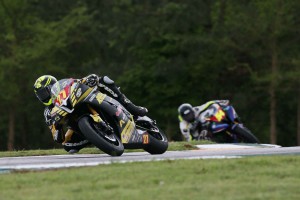 Beach, who won the season opener at Circuit of The Americas last weekend, continues to lead the championship point standings but only by a single point over Gerloff, 41-40. Herrin is third with 34 points.

Herrin's Meen Motorsports teammate, Roberts, won five AMA Supersport races (now Bazzaz Superstock 600) in 2013 before moving up to the Daytona Sportbike class (now Supersport). Like Herrin, he also had a forgettable season. Now he's back in the class in which he won, and today he rode to a sixth career victory, this one coming on a wet 2.54-mile Road Atlanta.

"The last win I had was at Miller Motorsports Park in 2013, so it feels great to be back on top," Roberts said after a relatively easy win in difficult conditions in the Bazzaz Supertock 600 final. "And with the racing going how it went with me taking off and getting a six-second gap, it feels really good."

Roberts beat Richie Escalante, the Mexican national champion who is doing a full season in the MotoAmerica series on his Escalante Racing Yamaha R6. Escalante ended up 8.5 seconds behind Roberts but was well clear of third-placed Travis Wyman on the Kyle Wyman Racing Yamaha.

With Road Atlanta marking the opening round of the Bazzaz Superstock 600 series, the points are the same as the results with Roberts leading Escalante by five points, 25-20. Wyman is third with 16. 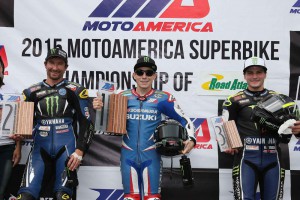 Saturday at Road Atlanta was also qualifying day for the MotoAmerica Superbike class, and the man who came out of the 15-minute Superpole 2 session with pole position was Yoshimura Suzuki's Roger Hayden. Hayden led the wet session with a 1:35.308 lap to best the two Monster Energy Graves Yamahas of Josh Hayes and Cameron Beaubier, the pair set to join him on the front row.

Hayes ended up .724 of a second behind Hayden after crashing out on the run to the final chicane, turns 10A and 10B, early in the session. A red flag for a downed motorcycle on the track helped Hayes in that he was able to return to the pits to get his second bike. He then went out and put in his best lap, a 1:36.032, to beat out his teammate, Beaubier, for second on the front row.

"This weekend I've been working really hard on the half-wet, half-dry things where previously Josh Hayes has been really strong in those conditions," Hayden said after earning his third career Superbike pole position. "I had a lot more confidence than normal and got a good first lap. On the second one I was like, 'I'm going for it.' I could have gone another lap, but I don't think I could have gone any quicker and I didn't really want to really go through that again. Going down the back straightaway, the bike was all over the place. I'm happy to get pole, but tomorrow is what matters and I feel ready to go either wet or dry. This track is actually a lot better than I thought in the wet. Whatever it is, we'll be ready and we'll try to make it count tomorrow." 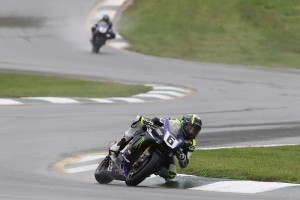 Monster Energy/Graves Yamaha's Cameron Beaubier had a perfect day in imperfect conditions at Road Atlanta, the Californian having it all his way in the Honda Superbike Challenge of Road Atlanta on a day when his main rivals in the championship faltered.

Beaubier topped his teammate Josh Hayes by 4.699 seconds in the first of two wet races on a day of horrible weather in Georgia. Then he and the rest of the racers had to endure a lengthy wait as the MotoAmerica and Road Atlanta crews were forced to wait out a storm before getting the flooded track race-ready again for what turned out to be a race time of close to 5 p.m.

In race two it was Beaubier again taking victory as he watched both of the men considered to be his fiercest competition for this year's title - Hayes and Yoshimura Suzuki's Roger Hayden (with his second race fall of the day) - crash out of the race. With those two out, it left Beaubier to move past fast starter Jake Lewis, on the second Yoshimura Suzuki GSX-R1000, to take victory by 3.789 seconds. Lewis ended up second, pairing that with his first-race third, and giving the 19-year-old Kentuckian the first two podiums of his Superbike career in just his third and fourth Superbike races.

With Lewis finishing third behind the two factory Yamahas in race one, fourth went to Yamaha Blumaz's Bernat Martinez with the Spaniard bettering his fourth in race one by one spot to earn the first AMA Superbike podium of his career in race two.

But this day was all about Beaubier who earned the fifth and sixth Superbike race wins of his young career. 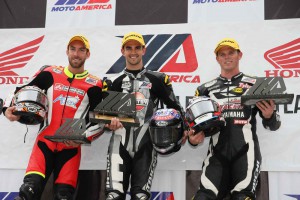 "I struggled a lot in the wet in the few outings we had last year," Beaubier said after sweeping the doubleheader for the first time in what is his sophomore season of Superbike racing. "To get two wins in the wet, sketchy conditions today was good for my confidence. In the first race Josh [Hayes] and Roger [Hayden] were riding really good and it was a bummer to see Rog go down. I put my head down and started clicking off laps. I just kept going, kept going. I had a good feel in the wet. I didn't want to throw it down, but I just kept clicking off laps.

"I was pretty timid in race two in turn one. I didn't know if there was any standing water or not and then Jake [Lewis] got me. Jake was riding awesome and I saw Rog out front just pounding out laps. I was like, 'Oh, man, he's gone.' I was struggling a little bit with grip. I saw Rog crash, I saw Josh [Hayes] crash. It was a bummer. I want to race those guys to the finish. I just kept trucking along."

Beaubier leaves Georgia with a 30-point lead over Hayes in the title chase after the first two rounds (four races), 95-65. Lewis is third with 60 points and Martinez is fourth with 51. Elena Myers, by virtue of her two sixth-place finishes today, is fifth in the title chase with 38 points.

The series resumes in four weeks at Virginia International Raceway in Danville, Virginia, May 15-17.

The Superstock 1000 class was run with the Superbikes as is the norm and those races wins were split between Yamalube/Westby Racing's Joshua Day and RoadRace Factory's Jake Gagne, both armed with Yamaha YZF-R1. Day won race one in his return to U.S. road racing and Gagne, who crashed in race one, bounced back for the win in the second race. Day's afternoon was a mirror image of Gagne's as he crashed out of race two after winning race one. 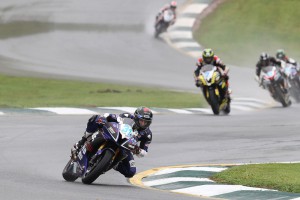 "It was kind of like a last-minute thing," Day said of getting the ride on the Westby Racing Yamaha. "I was planning on going to Europe again this year and then things kind of fell through with that. I went to COTA for the first round just so I could be there in front of everybody's face and they could see me in person and know that I was trying to look for something over here. They approached me and told me there might be an opportunity to race here. I ended up here this weekend and exceeded some of our expectations. They kept telling me that there were no expectations at all, but as a racer you always put things in your mind with what you want to do and try to accomplish. For myself, I think I was able to accomplish a little bit more than what I thought I could do."

Gagne's race-one crashed followed his crash in the morning practice session so he was pleased to get maximum points in the second race.

"Today was mostly me going down," Gagne said. "I made a stupid little mistake and clipped the inside paint in warm-up. The paint here in the wet is a no-go. I had a pretty good crash. In the first race I was still feeling good in the wet, but I came out of five and got a little bit too excited again. I was running my dry bike. I just got caught off guard. To come back and race with these guys... it was a fun race and I'm glad to be back up here for sure." 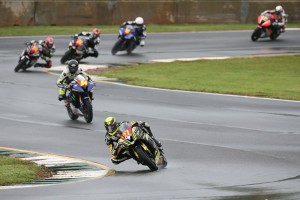 The win was Gerloff's first in the Supersport class after opening the season with two second-place finishes.

"It's good to finally get one out of the way," Gerloff said. "I know I can keep doing it whether it's wet or dry. The race went really well. As soon as I got a little bit of a gap, I relaxed a lot. That was a big help. I just tried to ride my own race and monitor the gap. It feels awesome."

Gerloff now leads the championship by eight points, 65-57, over Beach. Herrin moves to third with 54 points.

"Yesterday was a tough race because I was pushing hard the whole time," Roberts said after his perfect weekend. "It was a little hotter yesterday than today, but I think today was where I had the most pressure on me with the situation with the track drying out and us being on rain tires. You really had to keep your focus in that race so I think today was a little tougher than yesterday."