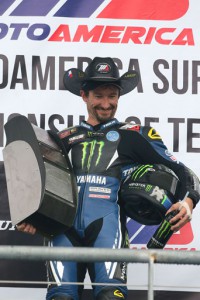 Josh Hayes turned 40 last week, but apparently age hasn't slowed him down. Riding in a Texas rainstorm, the Monster Energy/Graves Yamaha rider showed he's still the master of the class as he sloshed his way to a calculated victory over teammate Cameron Beaubier at the Circuit of The Americas. Yoshimura Suzuki's Roger Hayden ended up third.

Rain moved into Austin area just prior to the start of the Supersport final and it hung around until after the two MotoAmerica debut races were completed. More of it is expected for Sunday's second race of the Superbike doubleheader, which will run at the end of a busy day of Moto3, Moto2 and MotoGP racing as MotoAmerica is sharing the weekend with the Red Bull Grand Prix of the Americas.

Hayes took off from the start for the 12-lap final and opened up a gap almost four seconds early in the race. Pole sitter Beaubier chipped away at the lead and got it down to 2.5 seconds, but Hayes was able to maintain the gap and eventually stretched it back out to win by 5.279 seconds.

It was the 49th AMA Superbike win of Hayes' career and the four-time AMA Superbike Champion dedicated his victory to his friend Dane Westby, a MotoAmerica racer who lost his life a few weeks ago in a street accident. 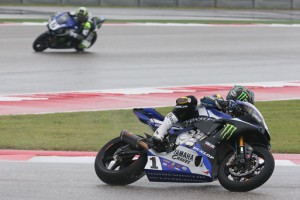 "There are just so many things going on this weekend," Hayes said. "Just so much: new series, new machine. There is a lot of Yamaha brass here for a big weekend with MotoGP. A lot of things happening with so much of my family here, a lot like Rog (Hayden). I have a lot of friends here in Texas and I'm a bit overwhelmed. We've had some dodgy weather, we've had some good weather, we've had a little bit of everything. I feel like we've had a good sprinkle of everything. To have a successful race weekend and come out of here with a win, regardless of what happens tomorrow, it's fantastic. I'm very happy to be up here and get one in for Yamaha and the new R1. My team has done an amazing job. I was prepared, rain or shine. Mentally, I was in a really good state. I was ready to go either way very early in the weekend."

Fourth place in the Superbike race went to Bernat Martinez on a Yamaha YZF-R1 with Yoshimura Suzuki's Jake Lewis rounding out the top five in his Superbike debut.

The Superstock class ran together with the Superbikes and it was RoadRace Factory's Jake Gagne riding his Yamaha YZF-R1 to victory over the RSV4 of Aprilia HSBK Racing's Dustin Dominguez. Tyler O'Hara rode the Tyler O'Hara Racing Yamaha R1 to third place.

"My plan was to get out there and do my own thing, let the race come to me and be there in the end," Gagne said. "I put my head down and rode hard in the beginning to try and keep those guys (the top three Superbikes) in sight. Josh (Hayes), Cameron (Beaubier) and Rog (Hayden) were all hauling butt. About halfway through I had some moments and I couldn't hold on to Rog any longer. I wanted to bring this thing home and get the Yamaha R1 on the top of the Superstock podium. I'm stoked. It's my first time on the 1000 in the wet and it was a big eye-opener, but I had fun out there and I'm glad we brought her back home." 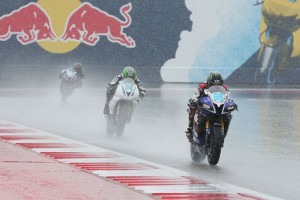 The Supersport final was a wild race with several of the top racers crashing out in the difficult conditions. The man who stood on the top step of the podium when all was said and done was Yamalube/Y.E.S./Graves Yamaha's JD Beach, the Kentuckian taking his first-ever win in the premier middleweight class and his first win of any kind in five years. Beach topped teammate Garrett Gerloff and M4 Suzuki/SportbikeTrackGear.com's David Anthony.

Among the top men who crashed out of the race were race leaders Josh Herrin, on the Wheels in Motion/Motosport.com/Meen Yamaha, and Latus Motors Racing Triumph's Bobby Fong. Both Herrin and Fong were able to remount, finishing seventh and ninth, respectively.

"It's great to get this first win, but I definitely want to dedicate this win to the Westby family," Beach said. "Coming into this weekend I wanted to win for myself, but I also wanted to win for the Westby family too. I know what it's like to lose somebody real close like that. This race is for them. When I came out of turn 20 and looked back and there was nobody there, it was amazing. I've been working hard for five years and it's been a long time since I've won a race. I'm living in Kentucky with a great family. The Gillims have helped me out a lot and doing winters there... I'm riding my bicycle and it's 20 degrees outside. I'm putting in the miles, putting in the work... to finally get that first win again is amazing." 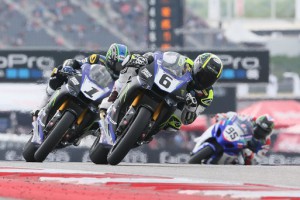 Cameron Beaubier (6) beat teammate Josh Hayes (1) and Roger Hayden (95) to win the Superbike race at the Circuit of The Americas on Sunday - Photo: Brian J. Nelson[/caption]

Hayes, who won Saturday's rain-sodden race one, pushed Beaubier for the full 12 laps with the battle coming down to the final corner. That's when Hayes tried to put his Yamaha YZF-R1 where there simply wasn't room. Beaubier held his line as Hayes tried to stuff it up the inside, the pair coming together with Beaubier sprinting off to the checkered flag for his fourth career AMA Superbike win. Hayes, meanwhile, gathered himself up to still finish a close second.

The pair now head to Road Atlanta with a win apiece and an identical tally of 45 points. 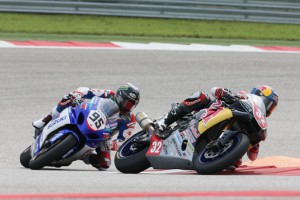 Jake Gagne (32) leads Roger Hayden (95) in their battle for third in the combined Superbike/Superstock 1000 race. Gagne finished fourth overall and first in the Superstock class for the second day in a row - Photo: Brian J. Nelson[/caption]

For the second day in a row, Yoshimura Roger Hayden finished third with the Suzuki rider much more competitive in the dry than he was in Saturday's wet race. The Kentuckian led some laps early, despite getting his Suzuki GSX-R1000 completely sideways through the esses on the opening lap. Hayden eventually lost touch with the lead duo and fell into a battle with RoadRace Factory's Jake Gagne. Hayden prevailed for his second third-place finish in a row with Gagne holding on for fourth overall and a runaway victory in the Superstock 1000 class, which runs with the Superbikes but is scored separately.

Aprilia HSBK Racing's Dustin Dominguez finished second in the Superstock 1000 class for the second time on the weekend, the Texan ending up 36.7 seconds behind Gagne on his RSV4. Taylor Knapp improved to finish third in today's Superstock final on the FourFour Motorsports Yamaha YZF-R1.

"Going into today we made a little front-end change, raised it up a little bit just to try it," Beaubier said. "We've been struggling a little bit getting off some off some of the tighter corners yesterday. I was actually struggling pretty good in the beginning. Roger (Hayden) and Josh (Hayes) had some pace on me. I slowly started connecting the corners a little bit better and getting some more confidence. I finally got by those guys. I put my head down the last few laps and I knew Josh was right there." 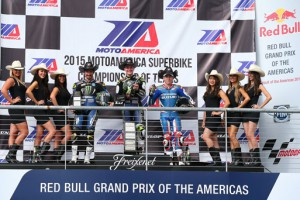 Beaubier was expecting Hayes to try something in the final corner and he was ready for it.

"I saw him coming in to the last corner and I was like, 'No, this is my frickin' race,' he said. "It was pretty cool to get it done today. I looked back to make sure he was up and then looked at my leg and there was some rubber there. But it's a lot of fun racing these guys. I feel like we have respect for each other, but at the same time we can lean on each other pretty hard. I'm looking forward to this year."


Circuit Of The Americas MotoAmerica Results and Point Standings