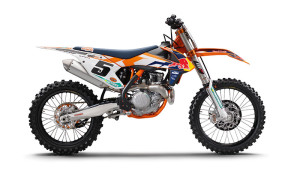 For the 2015 model, KTM has stepped up the game once more and developed a whole new generation SX model motorcycle.

Both the 450 SX-F and 250 SX-F Factory Editions have been developed with the primary objectives of weight reduction and mass centralization for improved performance. Both motors have been completely redesigned to be lighter and more compact while producing more power. The new engine cases on both models are redesigned to centralize the rotating mass of the crankshaft and clutch while reducing the overall length. Both models have a reworked Keihin Engine Management System with new 44mm throttle body and a new electronic launch control for efficient starts. New cylinder heads, revised valve trains, new combustion chamber geometries and optimized ports increase performance along with a new 5-speed transmission on both models to provide precise and easy shifting. 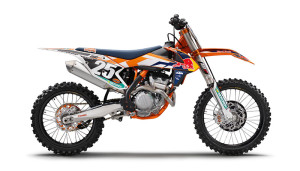 The chassis is completely reworked with a lighter chromoly steel frame that provides improved handling and energy absorption. A lighter subframe and swingarm match the new frame characteristics. The WP 4CS fork and brand new designed WP shock have been specifically designed for motocross and features revised damping settings optimized for the new chassis. The new upgrades result in a nearly 7 lb weight-reduction on the 250 SX-F Factory Edition and a remarkable 10 lbs on the 450!

For 2015, the 450 SX-F Factory Edition will be the bike of choice for Red Bull KTM Factory Team riders Ryan Dungey and his new teammate Dean Wilson. In addition, the BTO Sports/KTM Team will also use this race machine with team riders Andrew Short and Justin Brayton. In the the 250SX Series and 250 Motocross Championship Red Bull KTM Factory Team riders Marvin Musquin and Justin Hill will utilize the 250 SX-F Factory Edition alongside the Troy Lee Designs/Lucas Oil/Red Bull/KTM Team of Jessy Nelson, Darryn Durham, and Shane McElrath.