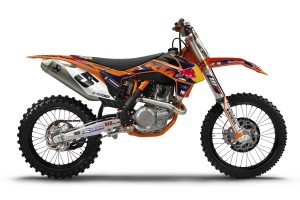 It is with great excitement that KTM announces the release of the second generation KTM 450 SX-F Factory Edition motorcycle - Photo: Mitterbauer H.[/caption]

It is with great excitement that KTM announces the release of the second generation KTM 450 SX-F Factory Edition motorcycle. The new model has been developed through collaboration with the Red Bull KTM Team and both the US and Austrian based Research & Development Departments. Each special edition model will come with a limited edition sticker that lists a model number for the unit out of the 555 models produced.

The 450 SX-F Factory Edition model was well received by consumers last year after selling out in only a few short months. It received further success after Ryan Dungey won the Phoenix Supercross in only the second race of the season and just a few months later when Dungey rode the machine to victory claiming KTM's first premier class championship in the 450 Motocross Series.

The dedication of the Red Bull KTM Team and R&D department to further push the limits and drive innovation of the new model has led to the significant changes seen on the new 2013 Factory Edition model. In just one year, KTM has already been able to introduce new changes and produce and upgraded model that will again be made available to the public.

While the Factory Edition remains based around the new generation 450cc fuel-injected, single-cam, four-stroke engine that has been tweaked specifically for motocross, the 2013 KTM 450 SX-F dirt bike, the factory edition model incorporates added improvements. The engine cases and clutch cover have been redesigned to minimize weight by removing the kick starter boss to save over 0.5 lbs and further reinforce the effectiveness of KTMs electric start system for racing.

In addition, the bike also has a map switch for easy adjustment of the new ignition curves and an hour meter to help track time between maintenance intervals. Keep your eyes peeled for this bike when it debuts at the opening round of the AMA Supercross Series on January 5, 2013 in Anaheim, CA. Bikes will be available at KTM dealerships in spring of 2013.