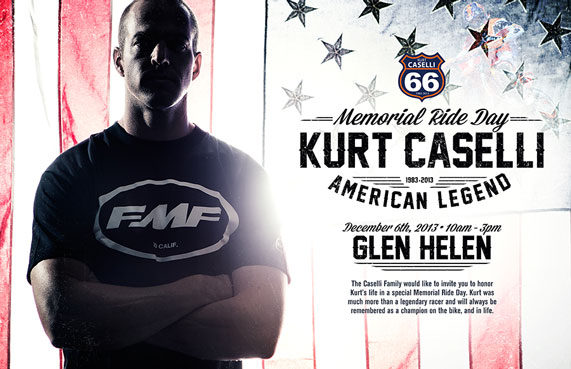 The Caselli family would like to invite all family, friends and fans of Kurt Caselli to honor Kurt's life in a special Memorial Ride Day held at Glen Helen Raceway on December 6, 2013 from 10:00am to 3:00pm.

It is with great sadness that KTM announced the passing of Kurt Caselli after injuries sustained in a crash while competing in the SCORE Baja 1000 last Friday. Kurt, 30, was an accomplished off-road and desert rider. He was admired and respected in racing circles for his skill, natural talent and exemplary sportsmanship far beyond the borders of his home country. While Kurt was one of the most popular figures on the KTM team, he was also an unmatched role model for young riders and fans. Kurt was much more than a legendary racer and will always be remembered as a champion on the bike, and in life.

The Caselli family is appreciative of all support received during this difficult time. They are also very grateful for all of the stories fans have shared of their memories of Kurt. If you have a story you would like to share with the family, please send it to the address to the right and your letter will be given directly to the Caselli family.