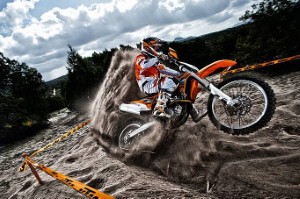 Everett, Washington, will be the host of the next round of the AMA EnduroCross series this weekend, as Taddy Blazusiak looks to keep up his winning ways with another strong performance. The race, held on October 20, could catapult Blazusiak into firm control of the title chase - or push one his rivals back into the fray.

Blazusiak is the likely favorite heading into the motorsports event. The KTM rider is coming off a dominating win at the Denver EnduroCross and has built up a 31-point lead with three rounds remaining in the series. He will face some stiff competition from Taylor Robert and Mike Brown, who came in second and third behind Blazusiak in Denver, respectively. The two are also the close behind him in the overall rankings.

Spectators planning to take in the action in Washington are likely in store for an exciting race. The track will have the standard obstacles of logs, water, sand and rocks, but these elements will be compounded by the wet weather at many local spots where the items were sourced. Technical proficiency will be tested at this event, which may end up being the most challenging of the series thus far.