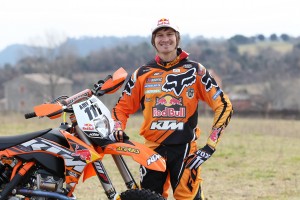 Blazusiak got off to a fast start, winning the hot lap session and his qualifying heat, reports Red Bull Racing. The main event was much of the same, with the Polish rider rocketing to the front during the first lap and holding on to the top spot for the remainder of the race. Blazusiak continued to build on his lead as led the pack over the diverse terrain of the indoor track, successfully maneuvering through the extended wood pile and wet track areas of the raceway.

His KTM teammate Mike Brown also had an impressive performance, winning his heat and finishing fifth in the hot lap. Brown eventually came in third in the final race, just behind Taylor Robert. Geoff Aaron and Justin Soule rounded out the top five.

There is a similar result in the points standings, with Blazusiak leading the way with 129 points. Taylor Robert is second with 98, and Brown is just behind him with 96. There are three rounds remaining on the 2012 EnduroCross schedule.