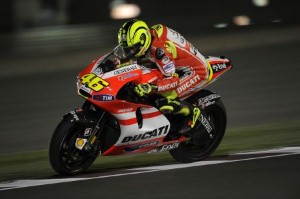 Italy's Misano Circuit served as the location for Ducati testing, as the manufacturer is in the process of updating its machines for the end of the motorsports season.

Ducati's private session comes after the team declined to test alongside others at the Brno track following the Czech Grand Prix. The team was disappointed with the results of that race, where star rider Valentino Rossi finished seventh. Karel Abraham, another Ducati entrant, finished ninth.

Rossi was joined by test rider Franco Battaini on the track for several hours and about 60 laps. The team focused on working on chassis updates, which they previously tried to test in July after the Italian Grand Prix. Technical director Filippo Preziosi and team manager Vittoriano Guareschi were overseeing the test but made no mention of potential engine upgrades or changes to the weight concentration of the Desmosedici, both of which have been recently speculated.

Once the two-day testing is complete, the Ducati team will have a 15-day break before returning for the San Marino Grand Prix. This race also takes place at Misano and Ducati hopes that injured rider Nicky Hayden will be healthy enough to return.