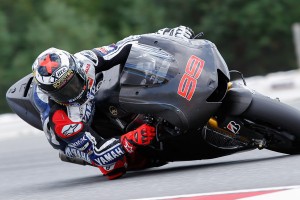 Yamaha's motorsports team stayed behind in Brno for Jorge Lorenzo to test the 2013 YZR-M1.[/caption]

The racing at the Czech Grand Prix may be over, but most of the MotoGP teams were still present at Brno yesterday to take part in testing new models and motorcycle riding gear.

Most notably, Yamaha's motorsports team stayed behind to test the 2013 YZR-M1. Jorge Lorenzo came in third in the test trials, where he rode the M1 prototype for the first time. The Spaniard is currently the World Championship points leader.

"We tried the 2013 bike today, for the moment it's a prototype so not the final one," Lorenzo said. "The engineers will now take the data away to prepare for our next test. We also worked on braking which was where I struggled with Dani [Pedrosa] during yesterday's race. We found something a bit better which should help us gain some tenths of a second."

Lorenzo's teammate Ben Spies also remained in the Czech Republic to test different settings for general performance of his 2012 M1. Spies has struggled recently in races and is looking for ways to improve before racing again in Misano.

Teams now have a week break before testing resumes in Aragon on September 4 and 5.