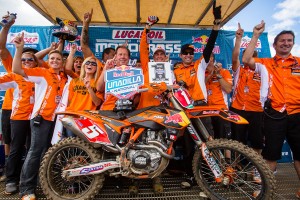 The Red Bull/KTM rider had to overcome an opening-lap crash in the motorsports race at Unadilla Raceway. He quickly rebounded and ended up winning the heat, climbing to first after falling to 11th place. In the second moto, Dungey leapt out into fourth place and never looked back. He grabbed the top spot after only a few laps and remained there until he crossed the finish line.

The victory at Unadilla clinched the crown for Dungey, who now has an insurmountable lead in the standings with two races left. He has a 113 point lead over Mike Alessi, the next closest competitor.