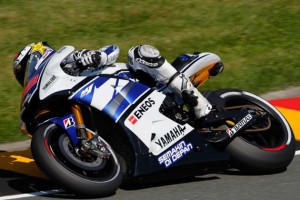 Yamaha rider Jorge Lorenzo was reportedly denied the use of a soft rear tire in the race by Bridgestone, and ultimately finished second.[/caption]

MotoGP has been full of surprises this season, and much of the drama has actually had to do with the riders' sport bike tires. Bridgestone is the official supplier of tires for MotoGP riders, but the tires used on the track can cause controversy if they aren't working correctly - and that's exactly what happened at the Assen Grand Prix two weeks ago.

At the Assen race, several riders had issues with their rear tires, which heated up beyond normal temperatures. Ben Spies lost several chunks of his tire on the final lap, costing him a podium position. Valentino Rossi, meanwhile, made a rare pit stop under dry conditions to get a new tire.

Bridgestone's Manager of Motorsport Tire Development, Shinji Aoki, recently sat down with Cycle News to discuss the issues, saying that a number of factors caused the problem. Higher ambient temperatures for this year's race, coupled with more powerful bikes and a changed track layout all contributed to the issues, Aoki said. The team at Bridgestone analyzed the tires to ensure such issues did not happen again.

Yet at the Sachsenring in Germany, tires continued to be in the news. Yamaha rider Jorge Lorenzo was reportedly denied the use of a soft rear tire in the race by Bridgestone, who were looking to avoid the same problems from the previous race. Lorenzo ultimately used the hard tire, and finished second, but never really challenged Dani Pedrosa throughout the race.