Eli Tomac Comes From Behind At High Point 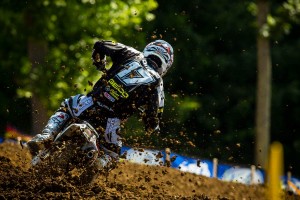 Though somewhat unexpected, the fourth round of the AMA Motocross 250cc class in High Point ended with Honda's Eli Tomac on top of the podium.

After the first moto, most expected Tomac's teammate, Justin Barcia, to repeat after winning last week. Barcia jumped out to an early lead in the first moto and ultimately led all sixteen laps to an easy victory, with Tomac and Kawasaki's Blake Baggett trailing in second and third.

In the next moto, KTM's Ken Roczen was out in front for most of the race, although Barcia and Baggett were hot on his heels. Baggett eventually slid out and fell back, allowing Tomac to catch up to Barcia in second. Eventually, Tomac got past his teammate, and when Roczen fell on the final lap, the Honda rider was able to get the victory.

"That second moto was a lot of work," said Tomac. "I never really gave in and kept fighting. Kenny [Roczen] had that mistake, so I ended up getting a chance for the win and I capitalized on it. I really think it was one of the best rides I've ever had because I had to come from so far behind."