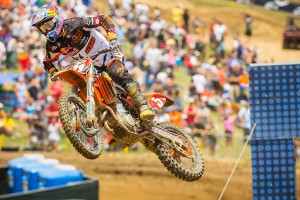 Ryan Dungey got off to a great start in moto one and rounded out the first corner in 3rd. By the second lap he was able to pass the number 29 bike of Andrew Short for 2nd. At the bottom of lap six Dungey was a man on a mission and posted the fastest lap of the moto. He began pressuring the 1st place ride of Mike Alessi for the lead. By the halfway mark, Dungey took his red plate KTM 450 SX-F and passed Alessi for the lead. For the next eight laps he maintained his position and continuously stretched his lead. Dungey crossed the checkers twenty seconds ahead of the competition to claim the first moto victory.

A holeshot in the second moto put Dungey in the early lead, but he was passed by the 2nd place rider of Alessi before the end of the first lap. After 5 laps of trailing Alessi, Dungey made an impressive pass to acquire 1st place. Picking up 2 seconds every lap for the remainder of the moto, he extended his lead 22 seconds by the finish. With a 1-1 moto sweep, Dungey took his second consecutive 450 Motocross class win and now has a 42 point lead in the series point standings. 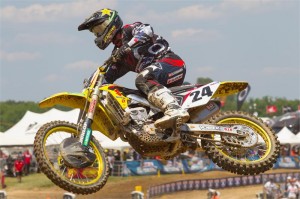 Yoshimura Suzuki's Brett Metcalfe raced his RM-Z450 to sixth place at the AMA Pro Motocross High Point National fourth round in Mt. Morris on Saturday as team mate James Stewart struggled with a wrist injury that occurred at the previous weekend's race, forcing him to pull-out of race two.

Although Metcalfe himself struggled in Qualifying, he bounced back at race time to put in two impressive motos. In the first, Metcalfe got a great start and finished seventh. After making small changes to the bike between motos, he returned to get another excellent launch in the second race and held onto fourth for almost the entire moto before a small mistake saw him slip into fifth.

Said Metcalfe: "I got great starts in both motos. The Yoshimura Suzuki RM-Z450 was awesome off the gate and that helped me get up there with the front-runners. In the first moto, I ended up seventh but I learned what I could do on the track and how I needed to change the set-up for moto two. In the second moto, I should've had fourth, but on the last lap I spun out and lost a spot. But we made big improvements throughout the day and I'm looking forward to carrying that momentum to Budds Creek."

Although Stewart was hampered by his injured wrist, he planned to race High Point nonetheless. But in the first moto, it was apparent that he wasn't 100 percent fit. The Championship-winning rider got a poor start and fought to hang on to his bike throughout the moto. Despite all this, Stewart still managed to finish fifth, but afterwards he and the Yoshimura Suzuki team decided the wisest move would be to sit out the second moto. 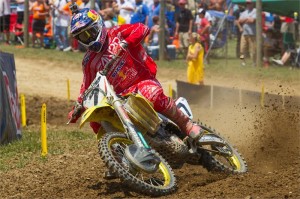 Despite being hampered by his injured wrist, James Stewart still managed to finish fifth in the first moto.[/caption]

"The weekend started off a little slow in the first practice," said Stewart. "But then I ended up quickest overall in Qualifying. My Yoshimura Suzuki RM-Z450 was working great and I was trying to do my best, but in the first moto I got a horrible start - outside the top 20. I was able to work my way up to fifth, which was pretty good, but about halfway through the race I was barely able to hang on. It just didn't make sense to race the second moto. It was a tough decision to make between the races - especially because everybody worked so hard. We'll go back and re-evaluate the situation. I'll probably just wait until the end of the week and see where we're at and go from there."

Team Yoshimura Suzuki Racing's next event is the fifth round of the 2012 AMA Pro Motocross Championship on Saturday, June 16th, at the Budds Creek National in Mechanicsville. 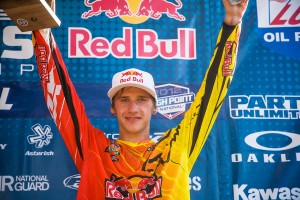 In the morning practice session Musquin claimed the Oakley Bomb award by posting the fastest lap in practice to earn first gate pick in the first moto. His teammate, Roczen, followed to nab the 2nd fastest qualifying spot.

Roczen had a respectable start coming through the first lap in 10th. He passed two riders on lap two to take over 8th place. He continued to impress his fans when he charged forward to 5th by lap four. He made one more pass before battling with Eli Tomac for 4th position. Unfortunately, Roczen surrendered the position to Tomac but was able to hang on for a strong 5th place showing in the first moto.

Musquin had a better start than his German teammate and rounded the first corner of moto one in 5th place. Musquin held his position until the fourth lap when Roczen moved by him. He remained steady from there out and finished the race in 6th behind his teammate. 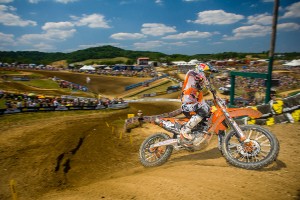 Roczen dropped the hammer in the second moto and nailed the holeshot on his KTM 250 SX-F. By the halfway mark of the race, Roczen had pulled to a 9 second lead out front. Unfortunately, Roczen suffered a crash with a few laps to go which allowed Justin Barcia and Eli Tomac to catch up to him. Although Roczen maintained the lead, he now had heavy pressure from the competition. With lapped traffic hindering the path, Roczen was not able to jump a section which allowed Tomac to pass for the lead. Roczen hung on to finish a close 2nd place. His 5-2 moto finishes earned him 3rd overall in the 250 Motocross class.

Musquin joined Roczen up front in the second moto after also pulling a good start. At the end of the first lap he was sitting in 4th position. He worked hard to maintain his position throughout the moto. He dropped back one position early in the race but was able to gain it back with a few laps remaining. When the checkered flag flew he crossed the line in 4th place. His 6-4 moto finishes earned him 5th overall for the day.

JDR/J-Star/ KTM rider Matt Moss makes his return to racing and his teammate, Malcolm Stewart, has a run of bad luck at the fourth round of the Lucas Oil Pro Motocross Championship Series at High Point Raceway

Both riders had decent qualifying times during the morning practice sessions and earned gate picks inside the top twenty; Stewart 12th and Moss 20th.

Stewart was hungry for a podium after his 6th place and season best finish the prior weekend at Thunder Valley MX Park. The gate dropped at the start of moto one and Stewart had a top ten start; he was up to 8th by the end of the first lap. He turned on the gas and got around Ivan Tedesco and Eli Tomac to hold down 5th at the end of lap 3. Stewart was on the move and passed the 4th place rider of Alex Martin and began pressuring the 3rd place rider of Wil Hahn. Unfortunately, a crash while passing Hahn for 3rd would keep Stewart from finishing the race.

Meanwhile, his teammate, Moss, was off to a mid-pack start and came through lap 1 in 15th. He was passed by two riders at the midpoint, but was able to get back around them on lap 9. With four laps to go, Moss made another mistake costing him three positions and putting him back to 18th. Moss stayed in position in the final laps and finished 18th in moto one.

At the start of moto two, Stewart grabbed a respectable 12th place start and started pushing his way to the front. On lap two he went down while trying to make an aggressive pass and again was unable to finish the moto.

The returning Moss found himself a little behind at the start of the second moto rounding out the first lap in 29th. He put his head down and swiftly moved through five riders by lap 2. He rode consistently and was able to pick up 2 positions every lap to sit 16th by the halfway mark. Although he was unable to hold off one rider behind him, Moss moved back to 17th on lap 10 and remained there for the duration of the race. His 18-17 moto finishes would give him 17th overall for the day in the 250 Motocross class. Moss earned 7 points to find himself 24th in the series points after only one race.

"Malcolm was riding really fast," commented JDR/J-Star/KTM Team Manager Nathan Ramsey. "He was passing into 3rd in the first moto when he crashed. Matt was riding pretty tight, but its OK for the first race back. I know he will do better at the next one".