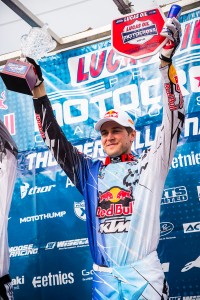 Red Bull/KTM Factory rider Ryan Dungey earned his first overall win of the Lucas Oil Pro Motocross Championship in the 450 Motocross class after sweeping both motos at the third round of the series held at Thunder Valley MX Park.

At the start of the first moto, Dungey jumped off the line to a 6th place start. He used the first lap to quickly pass two riders to move up to 4th place. On the second lap he made a nice pass on Jake Weimer to take over 3rd position. As he started the third lap he caught up to James Stewart and both of them made a pass on Tommy Hahn to take over 1st and 2nd place respectively after the finish line jump. A few corners later, Stewart suffered a crash and Dungey was able to move around and take the lead. Dungey went on to lead the remaining laps to win by a gap of 22 seconds at the end of the moto.

Dungey followed up his first moto win with a second victory in the next moto. This time, Dungey nailed the holeshot and put his KTM up front early. He led every lap of the 16 lap race and took the moto win and 1st overall for the day. Dungey's win at Thunder Valley moved him and his Red Bull/KTM 450 SX-F into 1st place in the overall point standings. 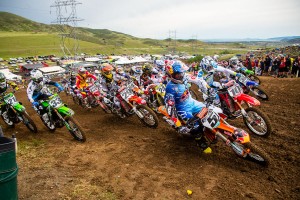 "I'm really happy to give Red Bull/KTM its first overall 450 Motocross win in the US. It's great to be a part of something that's full of firsts. Everyone on the team works really hard and we receive tons of support from KTM worldwide," remarked Dungey after his win. "No rider ever likes to see anybody get hurt and I really hope James (Stewart) is okay after his crash in the first moto. While pursuing championships it always comes down to staying healthy and being there every week and I plan to keep pushing forward and taking each race one and at time. We are heading to High Point Raceway next week and I have always liked that track and am looking forward to another good race." 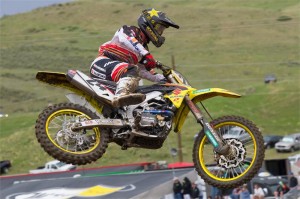 Team Yoshimura Suzuki Racing's Brett Metcalfe had plenty to celebrate after round three of the 2012 AMA Pro Motocross Championships at the Thunder Valley National in Lakewood on Saturday as team mate James Stewart crashed and failed to score after injuring his wrist.

Metcalfe raced his 2012 Yoshimura Suzuki RM-Z450 to a solid fifth-place overall, which included a podium finish in the first moto, but Stewart crashed while leading the first moto after a lapse of concentration when an individual crossed the track in front of him.

To say that Stewart suffered bad luck would be an understatement of epic proportions: Having won the first four motos of the season, he came into the Colorado event ready to race and he qualified fastest. In the first 450 moto, Stewart got a decent start and charged ahead on his Yoshimura Suzuki RM-Z450 to take the lead, but as he attempted to negotiate one of the fastest sections of the course, he unexpectedly encountered a person walking across the track. Immediately distracted, Stewart went down hard and injured his wrist and, hoping to minimize the damage, he did not race the second moto.

Said Stewart: "I had a good start to the day. Practice was good and we made some small adjustments to the Yoshimura Suzuki RM-Z450. In the first moto, my start was not what I wanted, but I was able to make some fast moves to get to the front of the pack. I had about a two-second lead and I was finding some rhythm. Then, as I came off a jump, there was a guy running across the track toward the inside of the turn where my line was. It blew my concentration; I took my eyes off the landing and then it was too late to do anything. Now, I'm just going to train this week and see how my wrist feels, but I want to make sure we're 100 percent for Mt. Morris." 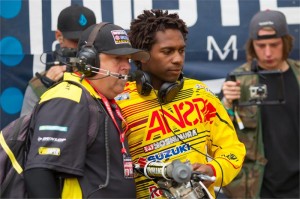 "I want to make sure we're 100 percent for Mt. Morris," James Stewart.[/caption]

Metcalfe was eager to get back into the mix at Colorado after a tough time at the previous race. He worked with the team all week on setting up the Yoshimura Suzuki RM-Z450. Feeling comfortable on the bike, Metcalfe qualified fourth and had a great first moto, picking up a podium finish thanks to a third-placed result. In the second moto, he got a good start but got caught up with some riders who crashed in his path. As a result, the Australian had to work his way through the field to 10th. Overall, however, Metcalfe finished the day in a very respectable fifth.

"I felt good coming in to this race," said Metcalfe. "In the first moto, it was intense early on, but I started picking guys off and had moved up to third by the end of the race. I felt strong and I was happy with third, and it was good to get the first podium of the year. In moto two, the Yoshimura Suzuki RM-Z450 was running great and I was feeling good. I got a decent start, but on the first lap I got tangled up with some guys who came together and I ended up way back in the field. I had to really charge through, but I was able to do that and got up to 10th. Overall, I'm happy with my riding and the results. Now we go to High Point, which is a good track for me and I'm looking forward to racing there. My riding is at a great level now so I need to focus on getting up front and staying in attack mode."

Team Yoshimura Suzuki Racing's next event is the fourth round of the 2012 AMA Pro Motocross Championship on Saturday, June 9th, at the High Point National in Mt. Morris, PA. 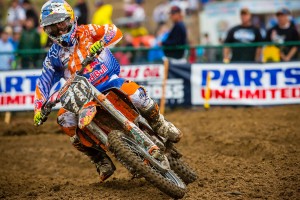 Both KTM riders jumped off the gate to a great start in the first moto. Roczen came around the first corner in 2nd position with Musquin just two spots back in 4th. Roczen immediately placed himself within striking distance of the lead rider, Justin Barcia. The two riders remained within a few bike lengths of each other for the first half of the moto. Once they got into lappers it gave Roczen another opportunity to pull closer. He closed the gap on Barcia and began to battle for the lead. With only a few laps remaining, Roczen tried to make a pass on Barcia and went down. He recovered quickly but lost a few seconds and was unable to catch Barcia at the moto end. Roczen went on to finish 2nd while his teammate, Musquin, put together a solid ride to finish 5th.

In moto two, Roczen and Musquin placed their KTM's inside the top five again. This time Roczen was sitting in 3rd around the first corner with Musquin in 5th. Both riders moved around Ivan Tedesco on the first lap in order to move up one position. From there, Roczen remained in 2nd place behind Barcia until lap six when Blake Baggett began to put heavy pressure on the KTM rider. Baggett was able to move around Roczen to pick up the position but Roczen remained strong and increased his lap time to close back on Barcia. He made the pass on Barcia for 2nd on the tenth lap of the race. With only a few laps remaining, Roczen suffered a crash while trying to find a different line to move around some lappers. He lost two positions while recovering and finished the race in 4th. Musquin went on to finish 5th in the second moto.

Roczen's 2-4 moto scores earned him 3rd overall and a spot on the podium. Musquin's 5-5 results earned him 5th overall marking his first top five finish of the season. 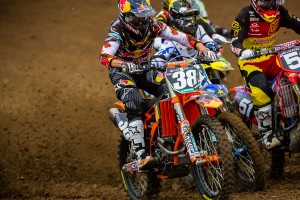 "Its great to be on the podium for the third week straight," remarked Roczen. "I feel like I rode really well this weekend. I had some good battles in the first moto and was able to keep pace with Barcia the entire moto. In the second moto, it was Barcia, Baggett and I battling and I was in the 2nd place spot when I got caught up in lappers on the final lap and went down. Barcia got by me and I finished 3rd in the race for 3rd overall. It was definitely frustrating going down on the last lap after two good races."

He continued, "The 250 competition is really tight so losing an additional three points by finishing 3rd versus 2nd could come into play later in the season. That's what I'm bummed about most. Apart from that, I am happy with everything else about the day. My bike worked perfect and I really enjoyed competing on a track that I've raced before (MX Des Nations 2010). It's especially good to be able to put KTM on the podium in the 250 Motocross class after my teammate, Ryan Dungey, put us on top in the 450 Motocross class." 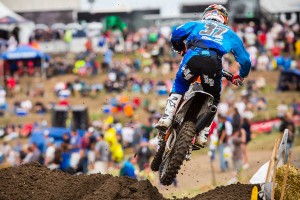 JDR/J-Star/KTM rider Malcolm Stewart earned his season best finish in the 250 Motocross class at the third round of the Lucas Oil Pro Motocross National Championship with a 6th place overall finish at Thunder Valley MX Park.

The day started out well for Stewart, after he qualified 6th fastest from the morning practice sessions. "Everything flowed really well this morning," commented Stewart. "I had two solid practices and was really looking forward to the afternoon motos."

Once the gate dropped for the first moto, Stewart was sitting in 13th position. By the end of the first lap he had already moved into the top ten. On lap three he had passed another rider to move into 9th position. He maintained his pace and rode a solid, mistake-free moto to gain one more position by moto end. He crossed the checkered flag at the end of the 16 lap race in 8th position.

In moto two, Stewart earned a slightly better start and rounded the first corner in 12th place. He sat in 9th position at the end of the first lap and then moved into 8th on lap three. He continued to charge forward turning impressive lap times while fighting to move up in position. He passed Ivan Tedesco for 7th place at the halfway point. One lap later, he made a pass around Wil Hahn to move into 6th. He held that position through the end of the moto to take his season best finish. His 8-6 moto scores earned him 6th overall for the day.

"It feels really good to finally get a top ten result," remarked Stewart. "We had a rough start at the first two rounds and it is great to get a solid finish in. We are hoping to repeat another top ten finish next weekend and continue to increase our goals from there."