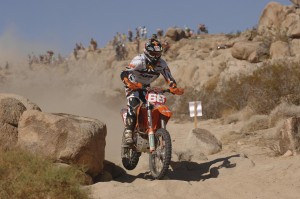 KTM Motorsports is excited to announce its rider line-up for the Factory FMF/Bonanza Plumbing/KTM/Baja Team that will compete in the 44th Annual running of the Tecate SCORE/Baja 500 event held in Ensenada, Mexico June 3-5, 2012.

The number 7X KTM 450 XC-F race machine will start the race in the hands of team leader Kurt Caselli. He will be joined by teammates Mike Brown, Ivan Ramirez and Marc Coma.

Caselli, the reigning AMA National Hare & Hound and WORCS Champion, is known for his desert racing skills and will be the starting rider for the team. The second rider for the team, Brown, has an extensive background in Motocross and Supercross racing and transitioned to off-road racing five years ago. The SCORE/Baja 500 event marks Brown's second SCORE event.

"I am looking forward to racing in Mexico once again," commented Brown. "Unfortunately, my previous teammate, Quinn Cody, was injured at the last event and our team was unable to finish the race. I am hoping for better luck at this event as I feel we have a very strong four rider team."

Returning to the 7X team is Mexico native Ivan Ramirez. The popular Mexican rider is well-known in the SCORE/Baja events and a great asset to the KTM team. Ramirez and Caselli teamed up for the SCORE/Baja 250 race earlier this season and were able to take home the first win for both riders in that series.

"We needed an additional rider for our team after Cody was injured earlier this season," stated Team Manager Antti Kallonen. "We are very excited to announce that our search brought one of the most gifted and well-decorated rally racers of our time, Marc Coma."

Coma, a 3-time Dakar winner, brings extensive experience in long-distance racing which will give a tremendous advantage to the KTM team. The Spaniard will come over a week early in order to test and prepare with his new KTM team.