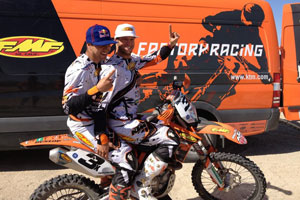 The talented duo raced aboard the KTM 450 SX-F in 248.64 grueling miles of rugged race course to come out on top of the podium. It was the first overall victory for both riders and the third victory for the KTM brand in the history of the event. Ramirez also made history as the first native to win in his home country.

Caselli started for the team and moved into the lead shortly after the first 30 mile check. He had one small crash shortly after but recovered without losing the lead. He passed the bike off to Ramirez who quickly set to work to grow their lead. Meanwhile the second KTM team of Mike Brown and Quinn Cody were off to a decent start sitting in third position. 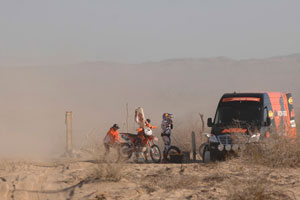 Kurt Caselli and Ivan Ramirez worked together to make history - Photo: Mark Kariya
At mile 65, Cody had a big get off and had to receive immediate medical attention for a broken wrist. Brown had already been driven to the third check point which put him too far away to drive back to the bike where Cody had crashed. Unfortunately, their race ended at that check.

Back on course, Caselli and Ramirez began a long battle with the JCR Honda Team. At one point the two teams were only seconds apart. When the checkered flag flew at the end of the 250 mile course it was the KTM team on top, finishing nearly 17 minutes ahead of the JCR Team. 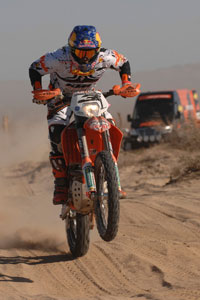 The KTM 450 SX-F served both riders well, bringing home their first overall victory - Photo: Mark Kariya
"It feels so good to get this win," remarked Caselli. "It is something that all of us on the team have put a lot of effort into over the last two years and it is great to finally finish on top with no major issues. I am sad to hear about all the injuries and wish all of the injured riders a speedy recovery."