Band To Release Single In Support Of Marco Simoncelli Foundation 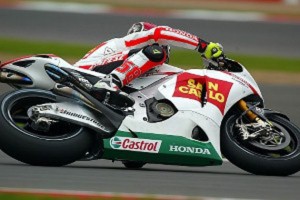 The motorsports world was stunned last year by the death of MotoGP racer Marco Simoncelli after a crash on the track. Now, a Manchester-based band, The Rainband, plans to release a single in honor of the late rider that will support the charity set up in his name.

The Rainband tells Crash.net they plan to release a new song "Rise Again," which was written about the late Simoncelli. All proceeds from sales of the track will go directly toward the Marco Simoncelli Foundation. The Rainband will also be performing the song live at Silverstone when MotoGP comes to England on June 18. The charity single has been officially sanctioned by Dorna, MotoGP and Simoncelli's estate.

Marco Simoncelli's charity aims to build hospitals around the world. Previously, the foundation sold a memorial t-shirt to fans of Simoncelli who wanted to support a charitable cause in the wake of the rider's death.

The track "Rise Again" reportedly features a contribution from former World Superbike champion James Toseland, who plays piano on the song. Toseland raced in World Superbike and MotoGP alongside Simoncelli and has since retired to pursue a career in music.