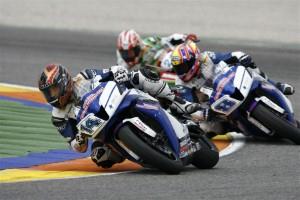 KTM pulled out of the AMA Superbike series a few years ago, when it seemed like every major manufacturer was making cuts to their motorsports budget. However, the company recently announced that they'll be getting back on the track, sponsoring HMC Racing again.

HMC will once again feature rider Chris Fillmore, who previously raced for them in AMA Supermoto. The team is now moving up to AMA Superbike, with Fillmore scheduled to be onboard the new KTM 1190 RC8R. The team raced in three AMA Superbike events last season to get a feel for the competition, but there was no official confirmation that the team would be back full-time until now.

"I'm very excited," HMC Racing team owner Mitch Hansen told Cycle News. "It's really a relief that KTM decided to go back racing and obviously Chris Fillmore is very happy. It was our plan originally at the end of last season to continue forward with this. For a while it was put on hold, but it looks like obviously they decided that it was good thing to do here in the U.S. and go AMA Superbike racing. So we're very grateful."