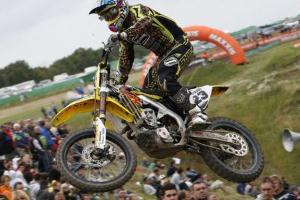 The Yoshimura Suzuki Racing team is putting all their faith in Australian Brett Metcalfe once again this year, but the rider says he's more than up for the challenge.

Metcalfe hasn't quite been able to crack the top tier of the standings in AMA Supercross, but Suzuki has kept him on as their sole representative for the 2012 season. Last year, the Australian had an injury-shortened Supercross season before coming back strong in Motocross. Two podium finishes, including one win, were good enough to earn him fourth overall.

Now the rider is hoping to keep that momentum going into the Supercross season, which starts January 7th.

"I'm really excited about Anaheim I," Metcalfe said in a team release. "Last season I had a tough time and I made some mistakes that took me out of the Supercross Championship, but I learned a lot. We really hit some points in the off-season testing and, right now, I think I'm riding the best Supercross I ever have. I'm excited about that and I can't wait until January 7th comes around and we get to go racing."