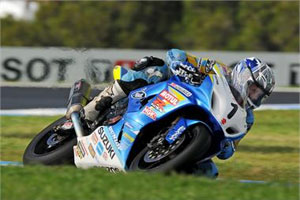 Team Suzuki's Josh Waters has signed to race for the Yoshimura Racing Team at the opening round of the 2011 World Superbike Championship at Phillip Island in Australia.


He said: "We are extremely excited to have Josh on board. He is a very talented rider and we look forward to seeing what he can do at his home track".


Perry Morison, General Manager, Motorcycles, Suzuki Australia was equally-excited about the Yoshimura opportunity for the Suzuki Superbike Young Gun, saying: "We're really happy that the Yoshimura Racing Team has asked Josh to race at the Phillip Island World Superbike round. The 2010 season was a challenging one for Josh, but he showed what he is capable of by returning from injury to take a race win at the MotoGP Superbike support race. His opportunity with Yoshimura now lets him showcase his talent on the world stage and I can't wait to see him race."


In addition to his involvement with the Yoshimura Racing Team, Waters will continue as part of Team Suzuki competing in selected Australian Superbike rounds.