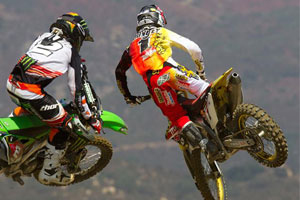 In the first moto, Dungey got pushed out on the start and had to work his way up from 10th on the first lap. He quickly worked his Rockstar Makita Suzuki RM-Z450 up to third by lap six and pushed hard until the end, passing for second on the 13th lap and ended up crossing the line in second. After another tough start in moto two, Dungey again worked his way up to third by the halfway point. The Rockstar Makita Suzuki rider put his head down and used the awesome power of his RM-Z to chase down the leader and make the pass in the closing stages to take the chequered flag for the moto win and the overall win for the day. The 2010 AMA Pro Motocross Champion finished off the season a close second to the top in championship points, amassing a total of six moto wins, 16 podiums and four overall wins. 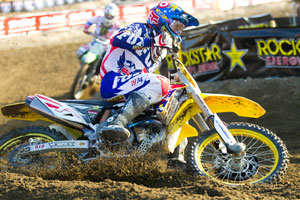 "It was a good day here at Pala," said Dungey. "I was able to go two-one for the overall win today on the Rockstar Makita Suzuki RM-Z450 and that was good. I had a tough start in the first moto and finished second, but we were able to battle back and manage to get through the pack in the second to take the win and get the first overall. It was a tough battle - It was really cool that the championship came down to this last race. Although we didn't win, we did a great job getting through the season despite all the adversity we had to overcome. I'm really happy with the way my Rockstar Makita Suzuki team stepped up. It's nice to be able to walk away knowing we did everything we could. It was a lot of fun and there are a lot of great memories. I want to thank the man above, my whole team and crew, my family, all the fans, and everybody in Japan that makes this happen. I'm really looking forward to the Motocross of Nations next week. It's great to go there and represent your country. It's really something special." 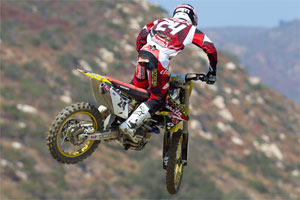 Metcalfe also put on an impressive performance aboard his Yoshimura-equipped Rockstar Makita Suzuki RM-Z450. After a solid start in the first moto, Metcalfe ran as high as third and consistently in fourth before a stall on the last lap dropped him back for a fifth-placed finish. Another strong start in moto two put Metcalfe and his Suzuki RM-Z into the front pack. He rode a strong and consistent race once again for another fifth-place moto finish and a fourth overall for the day. He finished off the year a solid fourth in Championship points and scored an overall win, as well as two podiums and three top five finishes.


"Pala worked out pretty good for me. I was able to pull off a fourth overall and I'm pretty happy with that. I was really looking forward to Pala because it's kind of my home race and I had a lot of friends and family here. I started out pretty strong in practice and I was really comfortable out there, which is the important thing."
- Brett Metcalfe

"Pala worked out pretty good for me," said Metcalfe. "I was able to pull off a fourth overall and I'm pretty happy with that. I was really looking forward to Pala because it's kind of my home race and I had a lot of friends and family here. I started out pretty strong in practice and I was really comfortable out there, which is the important thing. My Suzuki was working really well and I got into a good rhythm. I got two really good starts today and my Suzuki RM-Z450 was really fast getting down to the first corner. I rode well but could only manage two fifths for the day; in the first moto, I should have been fourth, but I stalled it on the last lap. It was a good day and now I'm looking forward to the 'Nations. I want to thank my whole Rockstar Makita team, Yoshimura and all my sponsors. They've all been very supportive the entire year. I also want to thank Suzuki for giving us such a great bike in the RM-Z and the support we need to race at this top level."

The Rockstar Makita Suzuki riders are heading to France next week to compete for their respective countries at the 2011 Motocross of Nations, which will be held September 17th-18th in Saint Jean d'Angely, France. Metcalfe will also be competing in the 2011 Monster Energy Cup to be held at Sam Boyd Stadium in Las Vegas, NV on Saturday, October 15th. 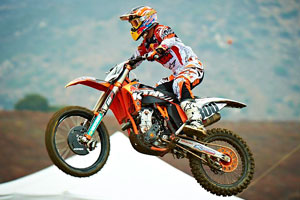 Alessi felt confident on the track early on. "I have ridden at Pala Raceway quite a few times over the past two years so I feel comfortable on this course. It is definitely a challenging track but I'm prepared for how rough it will get and am looking forward to the motos," commented Alessi after practice.

The #800 rider had 7th gate pick heading to the first moto based on his qualifying practice times. That gate pick turned out to be the best one on the line as Alessi rocketed his KTM 450 SX-F to the front of the pack to grab the holeshot.


"I am happy with my overall result. I have been consistently finishing in the top five which has helped me in the overall point standings tremendously. I was able to finish fifth overall in the series which is really impressive since I missed two rounds earlier this year after my crash at Hangtown. I'm glad to finish this season healthy and I'm looking forward to beginning my training for next year."
- Mike Alessi

Alessi and his Red Bull/KTM led the pack around the first lap of the race. Alessi continued to hold his own for the next two laps before receiving heavy pressure from Justin Barcia, Ryan Dungey and Ryan Villopoto. Alessi dropped to 2nd on lap four and remained in the runner-up position until lap seven where he was passed by series leaders Dungey and Villopoto. Once in 4th he maintained a consistent pace and finished the race in that position.

In moto two Alessi was able to garner a top five start. He came around the first lap in 5th place. He held that spot for another lap before dropping to 6th. On the next lap he fell one more position and moved to 7th. While in 7th he held off the hard charge of Kyle Regal for the entire 30 minute moto. At the end of the race he was able to get a comfortable cushion on Regal and finished 7th. His 4-7 moto results earned him 5th overall for the day. 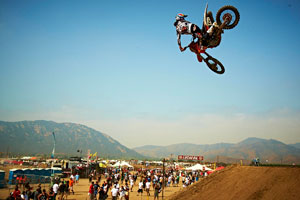 Red Bull/KTM Factory rider Marvin Musquin earned his second straight podium in the 250 Motocross class at the final round of the AMA Pro Motocross Championship Series at Pala Raceway.

Musquin proved he was a top contender at the Pala event when he turned the fastest lap time in the first timed practice session. He followed up his first practice time with another impressive practice session in the final qualifying round and ended up with the second fastest time in combined qualifying to ensure a great gate pick.

As the gate dropped for the first moto, Musquin jumped out to a top five start. He came around the first lap in 4th place and put in a solid effort to reel in the 3rd place ride of Tyla Rattray and was able to stay close throughout the moto. At the end of the race he was able to maintain his 4th place position for a solid finish.

In moto two, Musquin suffered from a worse start around 8th. He came around the finish line jump on the first lap sitting in 6th position. He was able to move into 5th place by the second lap and spent the next half of the race closing in on the 4th place ride of Kyle Cunningham. On lap ten he made the pass stick and moved to 4th. He held that position to the checkered flag to earn a consistent 4-4 result for the day. His combined moto scores earned him his second podium finish in two races.

"I am excited to end the season with another podium. It feels good to be up to speed. This track was fun today. It had lots of big jumps that I liked and I also enjoyed racing so close to home. Now, I will head to the Motocross des Nations to represent France before returning to the U.S. to begin Supercross testing," remarked Musquin. 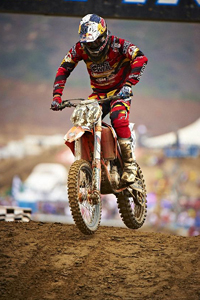 The JDR/J-Star/KTM Team wrapped up its first professional motocross season at Pala Raceway for the final round of the AMA Pro Motocross Championship Series.

Team rider, Tye Simmonds, had a poor start in the first moto and was able to move into 24th by the end of the first lap. He quickly picked off riders and had moved into 16th by lap six. Unfortunately, on the seventh lap of the race he suffered a mechanical issue that caused him to DNF. He was credited with 34th place for the moto.

In the second moto, Simmonds managed to pull a much better start. He started the moto in 11th place and maintained his pace to round the first lap in the same position. He charged hard and was able to hold his position through the end of the moto to mark his second best moto finish of the season.

"I am really happy with my second moto finish. I felt good the first moto too, but had a poor start and unfortunately a mechanical problem. In the second moto, I was really close to a top ten finish which is what I have been aiming to achieve. This season was a great learning experience for me and I want to give a huge thanks to the JDR/J-Star/KTM Team for supporting me this season," commented Simmonds.

In the 250 Motocross class JDR/J-Star/KTM rider Chris Plouffe suffered from two bad crashes in both motos that caused him to withdraw from the race. Plouffe's second moto crash in the first turn ended his day as he was sent to the Asterisk Mobile Medical Unit for further evaluation. He then returned to the pits to recover and luckily did not suffer from any broken bones. 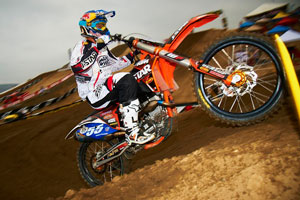 New to the team this week was FIM World Women's Motocross Champion Steffi Laier. The German women's motocross star came over to the U.S. to race the final round of the series of the Women's Motocross Championship. Laier finished 6th in moto one after coming up from a bad start. In moto two, she achieved a better start and was able to finish 5th overall just a second behind the 4th place ride of Vicki Golden. Laier's 6-5 moto scores earned her 5th overall for the weekend.