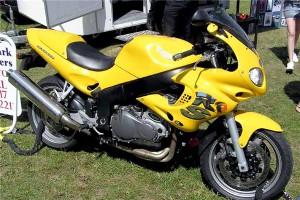 Triumph Motorcycles kicked off the International Motorcycle Show at Long Beach with a bang, unveiling seven new models - and a new CEO.

Greg Heichelbech is taking over as the chief executive officer of Triumph, joining the company from his former role as director of dealer development at Harley-Davidson. Heichelbech was on hand to reveal seven new models for the company, which will be part of what Triumph claims is its largest lineup of bikes ever.

The Tiger 800 and 800xc adventure bikes made their North American debut after being glimpsed at the EICMA show in Milan, Italy. They were joined by the new Daytona 675R and Thunderbird Storm, along with updated versions of the Speed Triple, Speedmaster and America.

The presentation marked the first appearance of Triumph at the show in five years.