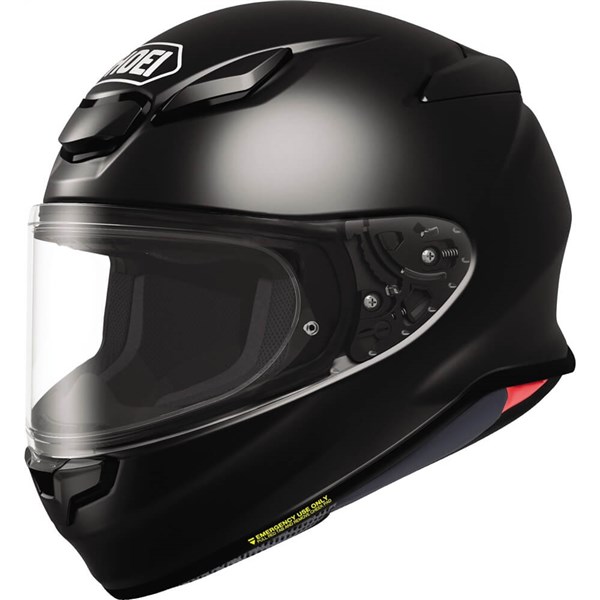 Shoei hit the new year with their hand on the throttle by introducing their newest full face motorcycle helmet, the Shoei RF-1400. While some companies haven't even been producing motorcycle helmets for more than 35 years, the RF line from Shoei is almost 40 years old. But just because the helmet line has been around for nearly four decades does that mean it's stuck in the past or fitted with dated styling and materials. The complete opposite is true.

Since the RF line was introduced in 1984, Shoei has continually strived to improve upon the helmet line with a new RF model every couple years. Each time Shoei released a new RF model it was steps above its predecessor in just about every aspect, from construction materials and fitment, to comfort and performance.

The last time the RF line was updated was seven years ago when the company brought out the RF-1200 full face motorcycle helmet. Since the RF-1200 was released in 2013, Shoei has been designing, shaping, and testing, to ensure the latest iteration in the RF line, the RF-1400, falls into the Kaizen philosophy of "continuous improvement."

Full face motorcycle helmets are by far the most popular segment amongst the motorcycling community and are chosen by riders from just about every genre from bagger long haulers and scooter commuters to hardcore track enthusiasts and weekend warriors. Therefore, to improve upon what was already a great helmet, Shoei addressed the factors that draw riders to choose a full face motorcycle helmet in the first place: safety, protection from the elements, comfort, and noise reduction.

According to Shoei they utilized their own state-of-the-art wind tunnel facility, proprietary materials, latest technologies and most stringent quality assurance practices to ensure the RF-1400 was their lightest and most compact SNELL approved full face helmet.

Key Improvements on the RF-1400

Some of the key improvements Shoei made to the RF-1400 include: 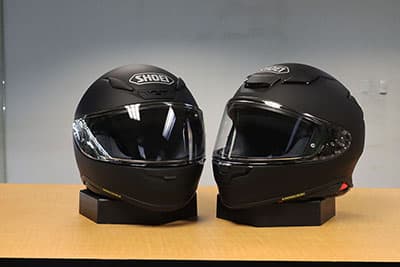 We took a Shoei RF-1200 (left) and set it next to the new Shoei RF-1400 (right) so that we could directly show you what's different. Both helmets are comprised of Shoei's exclusive Multi-Ply Matrix AIM+ shell, with a dual layer/multi-density EPS liner. The Shell is made up of a six-ply matrix of fiberglass. Looking at the two helmets head on you can see subtle differences such as the top of the eye port on the RF-1400 is a bit taller, venting is repositioned and restyled, and there are noticeable contours around the lower sides that aid in aerodynamics. You can also see there is more cushion and material around the underside of the mid jawline with the base of the helmet creating a more pronounced upside down V below the baseplate. 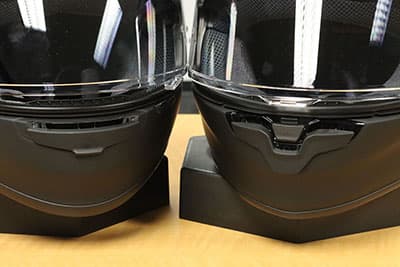 There's a noticeable difference in the chin vent design on the new RF-1400. Rather than one skinny vent across the chin like the 1200 had, the 1400 has two separate vents that look to provide a bit more airflow. Additionally, actuation of the chin vent is a bit more user friendly on the 1400 with a larger raised lip that spans across the entire vent. The raised section is also more pronounced. This design should make it easier to open and close the vent with motorcycle gloves on. 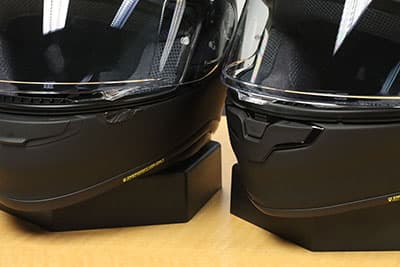 The visor lock mechanism has been relocated and completely redesigned for a more secure closure and better functionality. Instead of using your thumb or finger to push the visor tab over the hook on the side of the helmet there is now a button front and center on the RF-1400. Pressing this button in releases a latch that secures the face shield in the down closed position. Then you simply press up on the lip on the face shield to raise/open it. 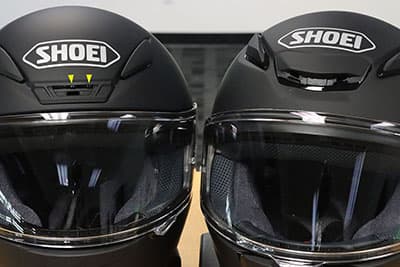 The two forehead vents on the new Shoei RF-1400 full face helmet provide more airflow and a better open/closure system. Instead of two extremely small tabs that you are supposed to use to settle a gloved finger onto or in between to open/close the single forehead vent on the RF-1200, the 1400 has a raised lip that's about two inches across. The new design not only makes it easier to operate but it also features detents as you slide the vent up/down to provide two venting options: half way open and fully open. 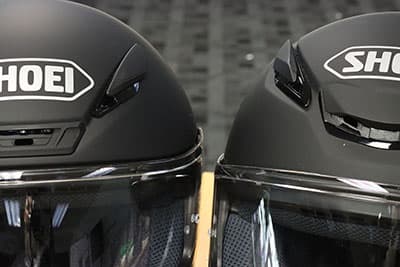 The two top vents on the RF-1400 feature more pronounced edges and angles which aid in aerodynamics and ease of use. The vent holes themselves seem to be pretty similar in size to the two RF-1200 top vents. But what you will notice is the distinctive channel that runs across the forehead. This channel helps direct airflow to the vents while also improving overall aerodynamics. The Rf-1400 has 6 total intake vents whereas the RF-1200 has 4. 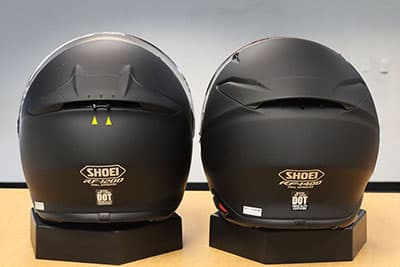 Looking at the back of the helmets you can see that the RF-1400 has distinct bodylines, contours, and channeling. The Shoei RF-1200 full face helmet has a rear exhaust port open/closure system comprised of two small tabs (yellow arrows)-similar to the forehead vent system. The RF-1400 doesn't have an open/close mechanism. The exhaust port on the RF-1400 is much larger and is always open. The overall shape of the helmet combined with the design of the exhaust port does a better job of moving hot air out of the helmet through negative pressure suction. We assume that with the wind tunnel testing, Shoei designers were able to improve airflow and reduce or minimize any back pressure that happened to get caught up in the back of the helmet; thus eliminating the need for an exhaust port open/close mechanism. 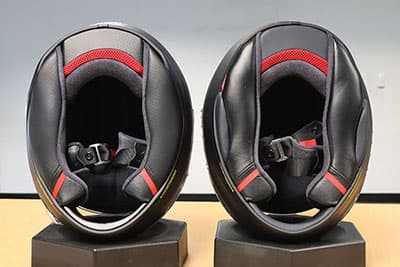 With this image we can see the major difference Shoei made to the RF-1400. The new full face helmet features redesigned cheek pads that are thicker along the bottom. You can see how the bolstered padding creates a narrower gap between the left and right side padding. The added padding improves comfort while also covering more area under the chin to help reduce wind noise. An added benefit for those that wear glasses is that the cheek pads have channels for the arms to slide into, reducing pressure against the rider's face. The interior is comprised of Shoei's 3D Dry Max Interior System II which is fully removable, washable, and customizable. 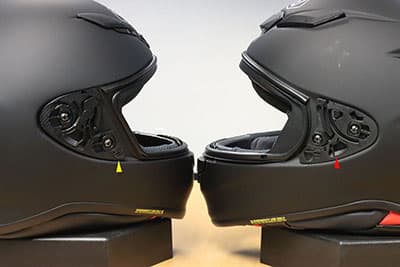 The RF-1400 got an entirely new base plate system. The trigger (red arrow) to remove/install the visor has been moved a bit lower so that it sits below the face shield and is therefore a bit easier to access and maneuver. The face shield adjuster mechanism also has more detents for more precise tuning when partially opening or closing the face shield. According to Shoei the new base plates also provide for smoother opening and closing. If, after time, there's a gap between the face shield and window beading system, small levers have been added to the base plates that help pull the face shield in tighter. The RF-1200 had the same feature, however, you needed a coin or flat blade screw driver to turn the adjustment dials (yellow arrow).

The RF-1400 was treated to new a window beading system that helps reduce wind noise. The eye ports on the two helmets are pretty similar except there's a large flat surface that runs across the top of the eye port on the RF-1400. 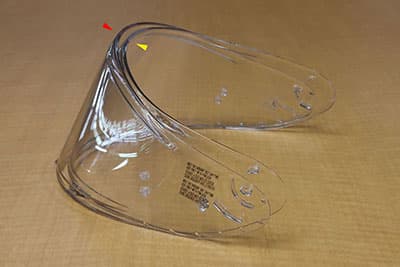 When comparing the face shields from the two helmets, we first lined them up so that the RF-1200 shield was inside of the RF 1400. Notice that the RF 1400 is slightly taller at the center (red arrow) than the RF-1200 (yellow arrow). The RF-1400 features an all-new face shield system called the CWR-F2. Shoei states the new face shield offers improved visibility, functionality and performance. Utilizing a 3D injection molding process the new shield provides more natural, distortion free, and optimized viewing throughout the entire eye port. Shoei says it incorporated Vortex Generators on the sides, which it borrowed from its X-Fourteen full face helmets, for improved aerodynamics and reduced wind noise. 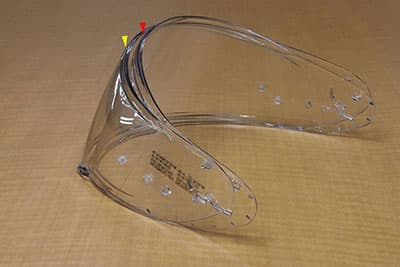 In this image we swapped the face shields so that the RF-1400 was inside the RF-1200. Again you can see that top of the RF-1400 is just a littler taller than the RF-1200. The new R-1400 CWR-F2 face shield also incorporates a new DKS-304 Pinlock Evo lens system that is 10% larger. The pins for the Pinlock system have been relocated further outside the eye port for better lateral viewing and enhanced anti-fogging. 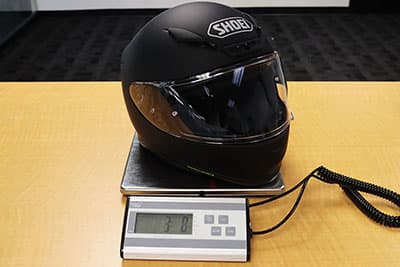 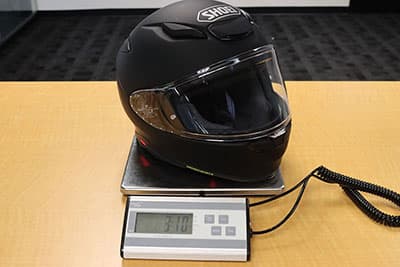 The same size Matte Black Shoei RF-1400 weighs 3 pounds 10 ounces. In their promotional literature Shoei states that the RF-1400 is their lightest and most compact SNELL approved full face helmet model. Two ounces is about the equivalent of two pieces of sandwich bread–we suspect most people wouldn't notice the weight difference holding one to the other. However, with the improvements that Shoei made in the aerodynamics by reducing the overall drag by 4% and lift by 6% users may notice a difference with improved comfort and less fatigue after a long ride.

As evidenced by all the changes that were made to the RF-1400, Shoei definitely held true to their Kaizen philosophy.