The JGRMX/Yoshimura/Suzuki Factory Racing Team ventured to PETCO Park in San Diego, California, for round five of the 2019 Monster Energy Supercross series. A challenging track caused by a winter rainstorm didn't stop 39,840 faithful fans from watching Suzuki RM-Z250 rider Jimmy Decotis rocket up to a third-place finish in the main event. Teammate Enzo Lopes finished third in his heat race but unfortunately, was held back in the main. In the 450 ranks, Supercross Champion Chad Reed soldiered through the challenging conditions to finish a season-best fifth place on his Suzuki RM-Z450. Justin Hill sustained a crash in qualifying practice that sent him to the hospital for further evaluation. 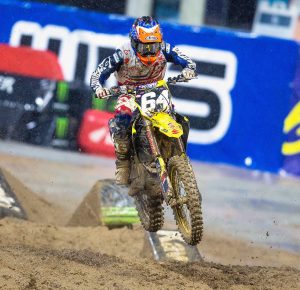 It was only a matter of time before Jimmy Decotis had a breakout ride in this year's 250 West series. Decotis finished third in his heat race and looked poised for a great race heading into the main event. After a top-five start, the yellow #64 methodically picked off riders through the muck and mire and passed for third place on the final lap to tie his career-best finish. The podium finish moved him up to sixth in the points standings; only two points out of fifth place. 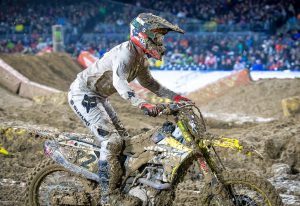 Riding in a fair share of mud races during his storied career, nothing can stop two-time 450 Supercross Champion Chad Reed from excelling when the conditions are far from ideal. It was a successful night in San Diego for Reed as he endured a three-way battle for most of the race and dug deep to finish fifth place in the main, a season-best. Reed moves into a top-ten position in the points standings.

Enzo Lopes' amazing speed was on display in his heat race, when he nearly passed the series leader for second place. He eventually finished third and was eager to score a top-five finish in the main. While running second on the opening lap, Lopes suffered a mud-related technical issue and went several laps down. The Brazilian fought through the problem and sloppy track conditions to finish 19th. 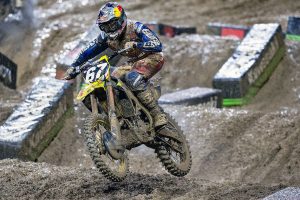 Justin Hill was nursing a shoulder injury from a qualifying practice crash at the previous round in Oakland. Unfortunately, the 2017 Western Regional 250 Champion fell during the single qualifying session in San Diego and suffered a rib injury. He was transported to a local hospital for further evaluation. The team will know the extent of Hill's condition later this week. The Suzuki RM-Z450-mounted class rookie currently sits 16th in the points standings.

Jimmy Decotis [250 Class, 3rd Place] - "The San Diego mudder was an absolute blast. I surprised myself in the muddy conditions. I pulled off my first podium of the year in some of the craziest conditions I've ever seen. I'm loving this Suzuki RM-Z250 so much. I've been so comfortable, and we are just continuing to build each and every week. I'll have several weeks off before we head to Atlanta. I'm excited to keep progressing! Thank you to all the crew and everyone on the JGRMX/Yoshimura/Suzuki Factory Racing Team."

Chad Reed [450 Class, 5th Place] - "San Diego is always a race I really enjoy. I had a great week in California leading up to the race. It was a rain schedule, which is always challenging. There was a lot of sitting around going on. The track was gnarly. My heat race start was okay, but I was splashed with mud and couldn't get clear vision quickly enough. I had to stop, but I came back to seventh. The main event wasn't my best mud performance, but I'm really happy to get up into the top five. I'm back in North Carolina this week and looking forward to continue working with the team to get up on that podium."

Enzo Lopes [250 Class, 19th Place] - "The day started off well. We all had one practice due to the rain, so I tried to put the whole practice together. I qualified seventh, which I was happy with. I had a good gate pick and started around fifth in my heat race. I was blind midway through the start because I got splashed in the pond that had developed right after the gate. I moved up to third and was making time on the leaders. Then I went off the track, caught up to some lappers, and couldn't do a few sections cleanly. Still, I was happy to get third in the heat. I had fifth gate pick for the main. The track was brutal. I had a decent start, made a few passes, and moved up to second. Right before the finish line the bike stalled out. Then I fried my clutch and couldn't regroup. I'll take the positives away. I feel like Jimmy [Decotis] and I would have put the team on the box, but it is what it is."

Justin Hill [450 Class, Did Not Race] - "I had a blast in the mud for a few laps, before I hit a hole in the whoops that was hidden under standing water. I smashed my rib cage into the handlebars pretty badly, so I went to the Alpinestars Mobile Medical Rig to get checked out. Unfortunately, there was a suspected puncture on my spleen that required a trip to a nearby trauma center. Results for my spleen came back negative. It turned out to be cartilage damage on my ribs. As soon as I can heal up from that I'll be good to go." 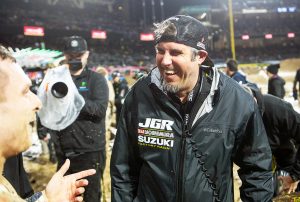 Jeremy Albrecht [Team Manager] - "This weekend went better than previous rounds. Enzo Lopes rode very well in his heat race. His clutch went out of adjustment while he was running second in the main event. He was able to get his bike going and he pulled into the mechanic's area to get it adjusted properly. Jimmy Decotis was steady all day long and embraced the mud. The mechanics did well with adjusting to the muddy conditions."

"Justin Hill hit his chest and re-injured his ribs from the previous weekend. He was checked out by the doctors and they thought he had an enlarged spleen, so he went to the hospital. It sounds like he has a problem with some cartilage. He's in some pain, and we're taking it day by day. Chad Reed had a good finish, but he feels like he left something on the table. He rode a bit tight in the mud."

The JGRMX/Yoshimura/Suzuki Factory Racing Team will travel to U.S. Bank Stadium in Minneapolis on Saturday, February 9th for the sixth round of the 2019 Monster Energy AMA Supercross Championship. This will also serve as the first round of the 250 East Regional Supercross series, featuring Alex Martin and Kyle Peters.