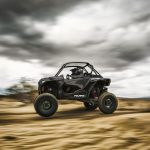 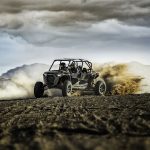 While the MSRPs may be lower, the performance and extremely durable build quality incorporated into the RZR XP Turbo S is still there. In fact, these two new Velocity models feature many of the same great characteristics and components such as:

So what's different and how was Polaris able to create this new model that is still a serious offroad machine but is yet more friendly with bank accounts? Basically Polaris stripped out some of the fancy doo-dads such as the electronic DYNAMIX Active Suspension, ditched the aluminum roof, and eliminated the LED lighting in the grille.

While the DYNAMIX suspension may be gone, that doesn't mean this vehicle is any less performance oriented though. In fact the adjustable, race-ready, 3.0-inch aluminum Walker Evans Velocity Shocks have been carefully selected to provide responsive handling and a plush ride across all types of terrain.

The new RZR XP Turbo S Velocity and RZR XP 4 Turbo S Velocity models also benefit from enhancements at the steering wheel, fuel injection system, and clutch box. According to Polaris there is 25 percent more assist in the power steering that equates to a better feel at high speeds and easier handling. When mashing the gas pedal the power comes on quicker thanks to recalibrated throttle mapping. And to help the drivetrain components last longer and reduce the occurrence of frayed belts or glazed over clutch plates due to the wear and tear of excessive heat, the clutchbox has been redesigned to enable more air to pass through..

The new XP Turbo S Velocity and XP 4 Turbo S Velocity will be available in a new Titanium Metallic color scheme and we hope to see the first arrivals here on at Chaparral Motorsports sales in a few weeks.