Last week we wrote about KTM's highly successful showing at the 102nd annual Pikes Peak International Hill Climb event with Chris Fillmore earning his second record run in two years, and Rennie Scaysbrook barely missing the overall victory in the motorcycle division. Fillmore roasted the course on the new 790 Duke claiming the win in the middleweight class along with setting a new course record of 10:04.38, beating out the old record by 30 seconds. Scaysbrook ripped the course on the 1290 Super Duke R for the Heavyweight class and missed the overall win by only .692 of a second. 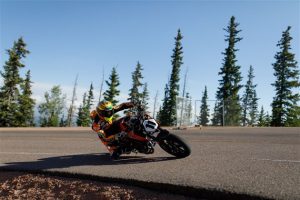 While both bikes are serious machines in their respective weight classes, the brand new, yet-to-be-released on American soil 790 Duke is proving to be a real standout as it allowed Fillmore to put his riding skills to full tilt and beat out the closest heavyweight litre bikes by 8 seconds.

Powered by a 799cc LC8c parallel-twin engine that puts out a claimed 105-hp and 87-ft-lbs of torque, and equipped with a host of electronics such as cornering ABS, Supermoto mode, lean-angle sensitive traction control, launch control, and a quick shifter the Duke is all business. You can get a firsthand perspective of Fillmore's record ride and just how awesome this new machine is by watching the video below. While not exactly stock, the Duke was treated to a host of components from the KTM Powerparts Catalog such as new rear set foot controls, rotors, an Akrapovic exhaust system, and a new seat. The suspension settings were also tweaked and the motorcycle tires were swapped out for a set more suitable for the road conditions. 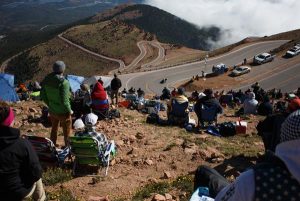 The video is really great as it offers a 360 degree view with the camera turning as Chris leans in and out of the corners often shooting directly back at Chris' and giving you a glimpse of his face through the faceshield of his Bell helmet. You also get to enjoy the throaty rumble of the Akrapovic system. Another interesting aspect of the video is you can get a feel for the effects the change in elevation has on the air temperature as Chris races up the 12.42 mile course and its 156 turns. The temp at the start on the Duke's TFT dash shows 63 degrees Fahrenheit and drops more than 20 degrees to 41 degrees as he crosses the finish line. The best part of the video however, is a the 11:00 minute mark just after crossing the finish line, when Chris looks back at his rear tire-to see if there's any tread left I assume...hahaha.