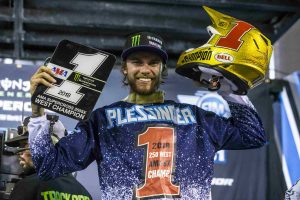 For the Monster Energy/Yamaha Factory Racing Team, the day had its ups and downs in the 450SX class for team rider Justin Barcia and fill-in rider Josh Hill. With the high speed and choppy track conditions, the team made some positive changes to the bike early on that proved to be beneficial. Barcia, the sixth-place qualifier, had a great jump off the line in his heat race where he entered the first turn side-by-side for the holeshot. However, he slid off the track and lost several positions before fighting back to finish fifth in the heat. Hill wasn't able to secure a transfer position in the heat race but he bounced back with a solid performance in the last chance qualifier (LCQ) to claim a third-place transfer into the Main Event.

As the gate dropped for the 450SX Main Event, both Monster Energy/Yamaha Factory Racing teammates had trouble getting through the pack on lap one - with Barcia sitting back in 14th and Hill in 22nd. Barcia fought his way into the top-ten after six laps and continued to push all the way through the checkers to finish in ninth.

Hill chalks up his final race as a fill-in rider for the Monster Energy/Yamaha Factory Racing Team this season as a positive experience, despite not getting the results he was hoping for in Las Vegas.

"We ended the Supercross season with a disappointing result. Justin Barcia rode well throughout the day. He made improvements in practice and then in the heat race he got a great start and looked like his old self but he went off the track early on, was shuffled back and had to work his way up to qualify for the Main Event. Justin suffered a poor start just inside the top-ten in the Main Event and he rode well, but just not good enough to work his way to the podium.

Josh Hill struggled all day, it seemed like his ankle was very sore with the big flat landings that the Vegas track brought to us. Josh was off the pace in the Main Event after going to the LCQ to gain a transfer position into the main."

"I went into the Main Event without the greatest gate pick so it kind of set me up for a tough situation but I felt like I could make it work. I just didn't come out with a good start. I charged through the pack a bit and then got a little bit tight in the beginning and the end of the race. It's super disappointing for me because the bike was so good. I've felt like we can get on the podium all season but I haven't performed the way I know I should be.

All-in-all, I'm glad to come out of this Supercross season on some positive notes. The beginning of the season went great, the middle of the season, obviously, I got hurt but then I came back and put in some solid rides. Not the podiums I wanted, but all-in-all I'm super happy with the Monster Energy/Yamaha Factory Racing Team and I'm really looking forward to the outdoor series. I believe we have a good bike that can win races and be in the title hunt outdoors, just like it could have been in Supercross as well."

"It was good to be out here in Vegas again and be racing in front of this crowd. I didn't have the results that I wanted and what I feel like I was capable of. I struggled with all the flat-landing jumps, my body just wasn't able to take it lap in and lap out.

All-in-all this was one of the most fun experiences of my life and I'm so thankful that Yamaha let me come back and do some races on the team that I started my career with and rekindle that friendship and passion for the brand Yamaha that I had growing up my whole life. I just can't thank them enough, it's been an awesome opportunity."

It was a great night for Aaron Plessinger and the Monster Energy/Yamalube/Star/Yamaha Racing Team as they captured the 250SX West title after 16 laps of racing in the E/W Showdown Main Event. Plessinger, who has shown dominance in all types of race conditions this season, notched four victories in 2018 to set himself up for a favorable outcome at the final round. With a championship on the line, Plessinger rode securely in the eighth-place position during the Main Event to ultimately bring home his first Monster Energy AMA Supercross 250SX West title.

"It was a crazy race, I got off to a mid-pack start and battled with a few guys and when I was right behind Osborne I knew I had the championship wrapped up so I stayed there and tried to stay consistent and not go down. I had one sketchy moment and I backed it down after that.

It honestly doesn't even feel real. I don't know what to say. It was a gnarly race and gnarly season. We're number one baby, it's a dream come true!"

The Monster Energy/Yamaha Factory Racing Team will take one weekend off before heading to Sacramento, Calif. for the opening round of the 2018 AMA Pro Motocross Championship on May 19.