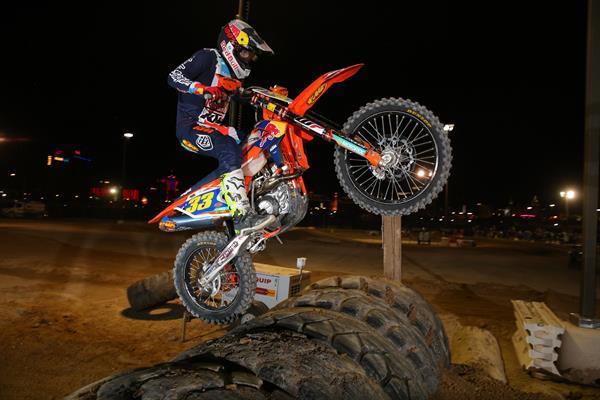 - The 2018 WORCS series kicked off this weekend in Las Vegas, Nevada with a unique format of offroad racing. KTM-mounted riders swept all three pro classes on Sunday, making for a successful start to the season for the orange brand. FMF KTM Factory Racing's Taylor Robert led from start to finish to claim victory in the premier Pro MC class, while FMF/RPM/KTM's Cooper Abbott followed suit with a dominate victory in the Pro 2 class and his teammate, Spenser Wilton, topped the Pro 2 Lights class.

Held at Orleans Arena just west of the Las Vegas strip, the opening round presented an atypical race format as the course ran inside and outside of the arena and incorporated more technical obstacles that aren't usually in the desert-style events. Robert rose to the challenge and put his diverse riding skills to the test as he led all 26 laps of the day.

The Arizona native quickly got off the line to grab the Pro (MC) holeshot aboard his KTM 450 XC-F and he was able to set the pace for the rest as they entered the stadium section inside. Robert maintained steady lap times throughout the 45-minute race to ultimately finish 43 seconds ahead of the 2nd place rider, Ty Tremaine (HQV).

Taylor Robert: "The track in Vegas was really cool for what it was! It was cool to mix it up like that and definitely different than most WORCS races with more variety on the track. That's what I like to pride myself in, being a good all-around rider, so it was a good change for me. I was excited on the night and a good way to start off the season. I just have to keep the momentum rolling and stay healthy."

Robert is still on the road to recovery after undergoing surgery in January to repair face injuries sustained during a practice crash just after the new year.

FMF/RPM/KTM rider Dante Oliveira put forth an impressive performance in his Pro debut with a 5th place finish, while his teammate Eric Yorba finished 11th in the premier class.

FMF/RPM/KTM rider Cooper Abbott had a standout ride in the Pro 2 class as he led all 16 laps to earn his first WORCS victory aboard the new KTM ride.

Similarly, his teammate Spenser Wilton, dominated the Pro 2 Lights class leading 15 of the 16 laps for a big win at Round 1.