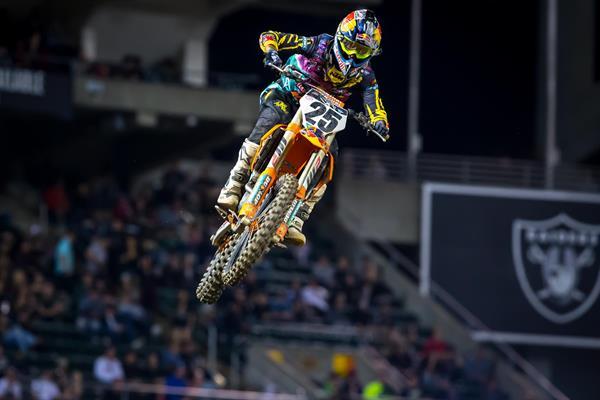 Calif. - KTM factory racers earned three top-five finishes on Saturday for Round 5 of the AMA Supercross Championship in Oakland, California. In the premier 450SX class, Rocky Mountain ATV*MC - WPS - KTM's Blake Baggett made his first podium appearance of the season with an impressive 3rd place finish, while Red Bull KTM Factory Racing's Marvin Musquin finished 4th after experiencing a crash in the Main Event. In the 250SX West division, Troy Lee Designs/Red Bull/KTM Factory Racing's Alex Martin captured a top-five finish in his first race back from injury since Round 1.

Musquin got off to a great start in Oakland, qualifying 2nd overall for the day in the 450SX class. The Frenchmen grabbed a 3rd place finish in his heat race, setting himself up for a favorable position in the Main Event.

Musquin maintained his momentum in the 450SX Main Event as he captured a top-five start aboard the KTM 450 SX-F FACTORY EDITION. From there he quickly moved into the 3rd place position on the opening lap. Musquin battled for a podium-position through the first half of the race before a crash on lap 12 dropped him a few positions back in the overall running.

Musquin was able to remount quickly and finish the race strong to ultimately salvage 4th overall for the night, just behind KTM-mounted Baggett.

Musquin: "It was a good day overall. I was feeling really good in practice, the track was technical and rutted and I got a lot of good laps in. I had great starts in both the heat race and the Main Event, which was really nice. I was running 3rd in the Main Event, pretty happy with my riding, and Jason ran me really high in the berm and then I crashed. That was a bummer but I got up pretty quick I was able to pass Seely after he made a mistake. We battled for a couple laps and from that I was running 4th place and basically on my own, there was nothing really I could do at that point. I was looking forward to getting back on the podium tonight and I was feeling good until that crash really slowed me down. But I'm happy with the training I've done this week and the shoulder is feeling a lot better so I'm feeling like myself again and looking ahead into San Diego."

Red Bull KTM Factory Racing Team's Broc Tickle had his work cut out for him in the Main Event as he began the race well outside the top-ten. Tickle struggled to find his pace early on but he continued to charge his way up to the 8th place position, where he ultimately matched his best finish of the season with 8th.

Tickle: "We're continuing to build each and every week. I feel like I've had the best week that I've had in a while, so I'm going to continue to work on improving for next round. I feel like I'm in a good spot to keep going but I'm not showing myself 100 percent - I feel like I'm showing 85-90 percent compared to what I'm capable of - so I know I need to keep working. It's Round 6 next week, we're getting close to the midpoint of the season and that seems to be when I turn it around so I'm looking forward to going back east and heading back to Florida in a couple weeks."

250SX West
In the 250SX West Main Event, it was Alex Martin who shot off the line aboard his KTM 250 SX-F to grab the holeshot after missing the last three rounds due to an injury sustained at the opening round. Martin held tough, leading the first two laps of the Main Event, where he maintained a top-three position throughout the first half of the race.

After 19 laps of racing, Martin was able to hold his top-five position to ultimately finish 5th overall in his first race back from injury.

It was a tough night for his teammate Shane McElrath, who won his heat race and came into the Main Event with great momentum behind him. McElrath didn't get the best jump off the line, where he sat outside the top ten on the opening lap. Just when he started to gain traction, McElrath got cross-rutted and went down hard, which sent him back to last place on the race track. After a brief stop in the mechanic's area, McElrath resumed racing where he was able to salvage 15th place for the night.