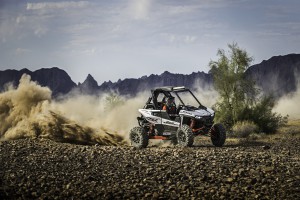 On the heels of the official unveiling of the new Polaris RZRÂ® RS1, Red Bull Global Rallycross is pleased to announce that the new model will be the exclusive vehicle used in the series' new side-by-side class, Polaris GRC. The RZR RS1 will see its first rallycross competition on Saturday, May 19 in the 2018 season opener, taking place at the Kentucky Exposition Center in Louisville.

"Since we first announced the addition of a Polaris-exclusive class for the 2018 Red Bull GRC season, fans have been eagerly awaiting the news of which side-by-side model would compete," said Red Bull GRC CEO Colin Dyne. "The RZR RS1 will be an exceptional addition to our grid and will provide an action-packed experience for our fans all season long."

"Red Bull GRC is the perfect platform for the most agile RZR ever," said Matt Boone, RZR and GENERALÂ® Marketing Director. "The all-new vehicle is race inspired and built for the best drivers in the world! We cannot wait for those drivers to put the single-seat side-by-side to the test."

RZR RS1 delivers power and precision for a driver-focused off-road experience unlike any other. Featuring the power and suspension of the RZR XPÂ® 1000's with an upgraded drivetrain, the RZR RS1 harnesses this extreme performance in a precision-balanced chassis for unmatched agility. The single seat puts you in the optimal center-of-mass driving position for the ultimate drivers experience.

The Polaris GRC class will implement similar safety requirements and race format to the existing GRC categories. As a result, Polaris GRC competitors will see more track time than other side-by-side series. Competitors interested in racing in the new Polaris GRC category can contact info@redbullglobalrallycross.com.