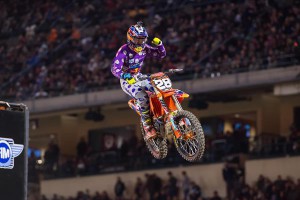 . - Round 3 of the AMA Supercross Championship mixed things up on Saturday night as the series introduced its first-ever Triple Crown race format, which presented three Main Events throughout the night for a combined overall score. Troy Lee Designs/Red Bull/KTM Factory Racing Team's Shane McElrath had a successful experience with the first of three Triple Crown events as he came away with 2nd overall for the night where he sits tied at the top of the 250SX points standings after three rounds.

It was a tough evening for the Red Bull KTM Factory Racing Team in the 450SX class. After sustaining a shoulder injury that hindered him from racing just one week ago in Houston, Musquin came into the weekend with uncertainty about his condition. The Frenchman began the day positively as he qualified 2nd overall in the timed sessions, placing him into the Main Event format with ease.

However, in the Main Events, Musquin wasn't able to get the starts he was looking for, which made it difficult to climb through the pack with the shorter race times. As a result, Musquin was only able to score 9th and 11th place finishes in the first two races of the night. Musquin struggled the most during the third and final race, where he ultimately pulled off after four laps of racing.

Musquin: "Tonight was tough. The plan was to take it session by session today and that's what we did. We qualified 2nd fastest and made it through the first and second races so that was good. Starts were everything on this track but I didn't make the most of them or put myself in a place that made it easier, especially considering I'm battling a shoulder issue. And battling mid-pack only made things harder. By the third race I just didn't have it to hang in there for the entire race. Not going to lie, my shoulder is very sore but given Thursday I didn't even know if I would be able to race, I'm happy salvaging 10 points and will keep working on helping my shoulder heal this week to see where it's at by Phoenix."

Broc Tickle, too, experienced a tough night in Anaheim as he ultimately finished 16th overall for the evening. Tickle ran into a setback right away in the first race as he was involved in a crash just after the start. Tickle remounted but wasn't able to regain any momentum in the short race. From there, Tickle continued to get poor starts and spent his time climbing through the pack. With improvement each race, Tickle finished 13th in the second race and 12th in the third race.

Tickle: "Overall tonight it was bad starts and putting myself in a bad position to get the laps in that I needed during the Main Events. Obviously with the schedule and the way it was formatted, it was kind of tough to work your way back from a bad start. So, I'm definitely going to work on starts this week - that's the main focus at this point. It's not like I'm riding bad, you just have to put yourself in a good position. It will come, I work hard to be the best I can be and I'm confident that we'll get there. We'll build each and every week and get back on our feet, after this weekend it was a tough one to swallow."

Troy Lee Designs/Red Bull KTM Factory Racing's Shane McElrath reclaimed the (shared) points lead after a 2nd overall finish at the Anaheim Triple Crown. McElrath maintained consistency all evening as he finished inside the top five for all three Main Events - his best coming in race two where he dominated the competition to walk away with a victory.

His teammate, Alex Martin, sustained a small fracture to his right clavicle at the opening round in Anaheim and therefore didn't line up for Round 3.