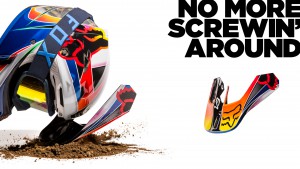 Last year at the third round of the 2017 Supercross season in Anaheim, we saw points leader, Ken Roczen hit the ground hard in one of the most devastating crashes we've seen in a long time. As we know, he suffered a serious arm injury that nearly ended his career, what we didn't know at the time, is that his injuries could have been much worse if it weren't for a trick new innovation that Fox Racing had included into the helmet Roczen was wearing. When Roczen's head hit the dirt his visor immediately popped off which helped reduce the chances of his head and neck incurring injury had the visor hung up on the dirt as his head, neck, and body slid across the surface. The Fox helmet Roczen was wearing was outfitted with its new (but yet to be announced or released) Magnetic Visor Release System (MVRS). Instead of plastic screws like most other mx helmets, the magnets secure the visor in place with enough force that it won't move or shift at high speeds but will allow it to easily release upon impact. Fox has now incorporated the MVRS into its line of [mageProductLink sku="260-19519-002-s" title=""]V3 helmets[/mageProductLink].

For the start of 2018 Roczen and Fox are back at it again, this time Roczen will be outfitted from head to toe in Fox gear with the release of the new Fox Vue MX Goggle. Roczen helped the Fox team create the goggle which took hours and hours of research, design, and testing. The new goggles feature a large eye port that provides a wide field of vision, a polycarbonate lens delivers pure visual clarity, and a new TruLock turn-to-release outrigger system makes lens swaps quick and easy. Fox is well-known for making great products that offer comfort, functionality, and protection, so it's safe to say we can expect nothing but the best from this collaboration.