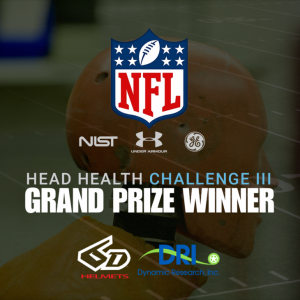 With traumatic brain injury and concussions becoming a growing concern among amateur and professional athletes, the NFL and GE have collaborated with Under Armour and NIST and created the four-year, $60 million Head Health Initiative. Today, they announce they have awarded 6D Helmets and Dynamic Research the Head Health Challenge III's $500,000 grand prize for their work with 6D's proprietary Omni-Directional Suspensionâ„¢ (ODS) technology.

"We're thrilled to be named the winners of the Head Health Challenge III along with our project partners Dynamic Research Inc.," said Bob Weber, CEO and co-founder of 6D Helmets LLC. "Together we worked to further develop Omni-Directional Suspension for application into multi-impact helmets. This award allows us to continue to refine our system for future helmet applications." 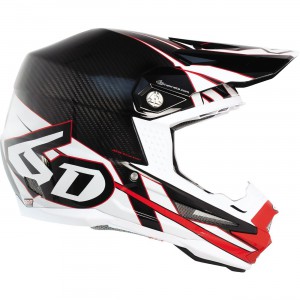 Supported by the U.S. Commerce Department's National Institute of Standards and Technology (NIST), the National Football League (NFL), GE (NYSE: GE), and Under Armour (NYSE:UA, UAA), the Head Health Challenge III's mission is to spur the discovery, design, and development of advanced materials to better absorb or mitigate forces within helmets, pads, and other products used by athletes, first responders, military personnel, and others who face potential head impact injuries.

"The goal of the Challenge is to support innovation and help stimulate the marketplace with next-generation materials and design, and the impressive work by Dynamic Research and 6D Helmets has the potential to do just that," said Jeff Miller, NFL executive vice president of Health and Safety Initiatives.

The Head Health Challenge III kicked off in early 2015 and attracted applications from more than 125 diverse companies and academic institutions. An independent panel of expert judges narrowed the list down to five finalists, and each were awarded $250,000 and a year of development time to enhance their materials while competing for the grand prize.

The Omni-Directional Suspension technology was originally developed by 6D beginning in 2011 and was sold commercially in its 2013 bicycle and motorcycle helmet lines. During the Head Health Challenge, 6D and Dynamic Research used advanced computer modeling, finite element analysis, and a series of iterative improvements to create a novel derivative of 6D's ODS technology with an unusual geometric structure. The judges award decision was based on the new multi-impact material systems' performance, potential commercial application and novel design. It reduced certain measures of impact by more than 70 percent when compared with baseline foam material commonly used in protective gear.

"The Challenge allowed us to exercise material testing and analysis that further unlocked the potential of our ODS technology," said Robert Reisinger, director of engineering and co-founder of 6D Helmets. "Over the course of the challenge, we gained a greater understanding of its capabilities by individually tuning for both linear and rotational forces to reduce brain injuring accelerations. Some of these new features are already supported in our latest product offerings."

While testing ODS during the competition, 6D developed a more efficient and lighter version for use in its bicycle helmets. The company swiftly implemented the new design into its ATB-1T EVO Trail helmet, which has been available through its network of retail partners and specialty bike shops since March of this year. 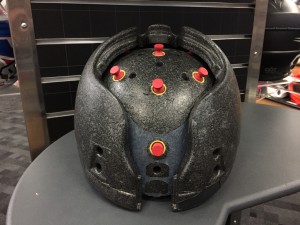 NIST established a dedicated testing facility for the competition to provide a common measure of the materials' performance. Each team submitted refined materials to NIST for testing at several points during the year, and NIST test data was provided back to them as feedback to modify their materials toward improved performance. 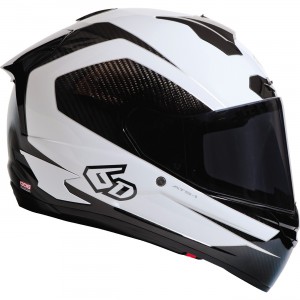 "I want to thank the NFL, GE, Under Armour, and NIST for sponsoring this challenge, and driving research," concluded Weber. "The $500,00 grand prize, which we share with Dynamic Research, will allow us both, and the industry as a whole, to move further in a positive direction to improve helmet performance and brain protection."