Motovlogger Lives Up To His Name And Saves The Day 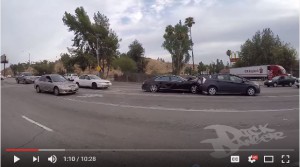 I'm not sure what's better, the fact that a hit and run/alleged drunk driver was taken off the streets before he could seriously injure or kill someone, or the motovlogger's name who chased him down? Actually, I do know what's better-the out of control driver off the streets-but you have to admit the name Dick Danger is pretty good.

This story is especially interesting since it occurred in our backyard, just a few exits down Interstate 215 from Chaparral Motorsports. A few days ago motovlogger Dick Danger was riding his 2003 Suzuki GSX R 600 on E. Washington Street in Colton. And as motovloggers do, he was recording his ride on his GoPro when behind him off camera, a black Mercedes came speeding across the double yellow and side swiped a white car in the oncoming lane. You can hear the collision and just as the Mercedes passes Dick's left shoulder he starts saying "whoa, whoa." Then the driver slams into the back of a pickup truck AND THEN the driver hits the back end of a Prius. TWICE!

After waiting about about 30 seconds without getting out of his car....wait a minute, what am I doing? It's all on Dick's video below, you can see for yourself what transpired. All we'll say is we don't condone speeding, running red lights, or disobeying traffic laws, but sometimes you have to do what's necessary for the greater good of the people. Dick did the right thing; he played the role of a Good Samaritan (if he hadn't chased down the driver who knows if he ever would have been caught) and got a hit and run and possibly DUI driver off the streets. While he says he's not a hero, Dick Danger definitely lived up to his name.