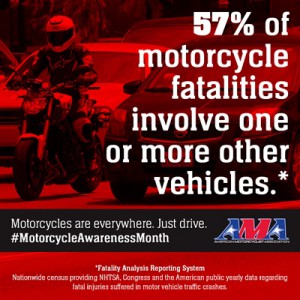 PICKERINGTON, Ohio - The American Motorcyclist Association is issuing a special appeal during May, which is Motorcycle Awareness Month, to motorists to be aware of their driving environment, check mirrors and blind spots before changing lanes and watch for motorcyclists.

"With its warmer weather and increased riding, May is an opportune time to educate the non-riding public about the safety issues that motorcyclists face on every outing," said AMA President and CEO Rob Dingman. "Our hope is that calling special attention to motorcyclists early in the prime riding season will keep motorists on alert through the summer and fall, as well."

Among the top issues affecting motorcyclist safety this year are distracted driving and over-reliance on new driver-assist technology.

Distracted driving is dangerous for all road users, claiming 3,477 lives in 2015 alone, according to the National Highway Traffic Safety Administration. Another 391,000 people were injured in crashes that involved distracted driving.

Distractions include any activity that takes the driver's focus off driving. The NHTSA provides these examples: talking or texting on a phone, eating and drinking, talking to people in the vehicle and fiddling with the stereo, entertainment or navigation system.

With the development of driver-assistance technology, such as adaptive cruise control, automated braking and lane-assist, some drivers may believe that distractions, such as texting while driving, hold less potential for harm.

Trusting their cars, instead of their eyes, ears and training, can create dangerous situations for drivers and the nearby traffic. And motorcyclists are at much greater risk when things go awry.

Drivers can avoid crashes with motorcyclists by taking extra care and looking twice to spot motorcycles in traffic -- especially at intersections -- respecting the motorcyclists' space on the road and by not following too closely.

The AMA's position statements on Distracted and Inattentive Vehicle Operation and other issues can be found at www.americanmotorcyclist.com under the "Rights" heading.

Motorcycle Awareness Month, launched by the AMA in the early 1980s and adopted by many state motorcycle-rights organizations, government entities and AMA-sanctioned clubs, is observed each May.