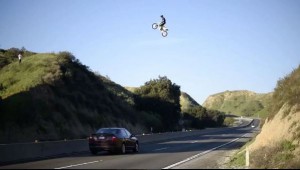 A southern California dirt biker was feeling froggy this past Friday and showed off his leaping ability by jumping a Kawasaki KX450F over a section of the 60 freeway in the Badlands area between Moreno Valley and Beaumont. A video of the stunt was posted on the Instagram account of @Kyle_Katsandris where it has been viewed nearly 140,000 times and garnered almost 2,000 comments, beyond that the video has been picked up by pretty much every southern California news station.

The key board warriors were out in full force. Where are you now #katsandrisleap #nolimits

The video which shows the early morning jump prep with several people cutting out the path and even the rider I seen smoothing out a section of the run-up with a shovel while geared up complete with his helmet and mx boots. Caught from multiple angles, the video shows the rider launch over the freeway as a single car passes underneath.

The post has also caught the attention of the California Highway Patrol who is not too happy about the stunt and is currently investigating. Besides the obvious dangers involved with jumping a dirt bike over a four lane freeway while unsuspecting motorist are passing underneath, the CHP says this was done without the proper permits and those involved could be charged with misdemeanor trespassing and reckless endangerment. As of yet no charges have been filed against any individuals. However, immediately after they became aware of the video CalTrans found the location and barricaded the pathway in an effort to discourage others from attempting the jump.