Ken Roczen's Scary Off At Anaheim 2 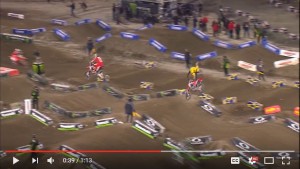 Three rounds into the 2017 Supercross season and we experience one of the scariest offs in that past few years, when Honda Factory rider Ken Roczen took a hard slam. The nasty spill occurred half way through the 450 main as Roczen was lining Cole Seely up in his sights to take make a move for second place, after a seventh place start, when he launched off a triple and got bucked flying some 50-plus feet with only his hands on the bike before he finally let go to separate himself from the bike before slamming hard into the face of a double. Warning the video and accompanying image from Roczen's Instagram isn't for the squeamish.

From where I was sitting (behind home base) when he landed Roczen was in between two jump so I couldn't see him and it seemed like it took a long time before medical personnel could actually get the cart to him to haul him off the track. Thankfully right before he was taken off the track I did see Roczen standing with the aid of others. An early report from Racer X right after the race stated that Roczen had suffered a compound fracture of the left arm. If you know anything about broken bones, you know whenever you hear the word compound it's not good and can be a pretty gnarly sight.

Just a few hours ago, Roczen posted on his Instagram page an update from the hospital and it's a pretty serious injury to the left arm with a dislocated wrist, dislocated elbow, and compounded radius. The post/image is below (warning it's a little graphic).

Dislocated wrist, dislocated elbow and compounded radius. The first 30h absolutely sucked as none of the pain killers worked and it was really swollen. Gonna need few surgeries to get all this dialed. ðŸ”´ I have gotten so many messages and was so pleased to read all of them. I didn't message back as the circumstances right now are just a bit gnarly and it would probably take me a day to reply lol. Just know i saw them! Love all you! Gonna need a few days for further info.

It's a very unfortunate outcome for Roczen especially based on the season he was having so far winning the two opening rounds with a six point lead over Ryan Dungey. Roczen and the brand new Honda CRF 450R were very impressive in the first two rounds with him wining A1 with a 16 second lead, and then following up with a great battle against reigning 2016 SX champion Ryan Dungey at San Diego. Many fans were considering this to be Roczen's dream season in which he would finally able to capture a SX title, unfortunately that won't be the case.

As it stands we don't know how long Roczen will be out, but we wish him the best and speedy and healthy recovery.