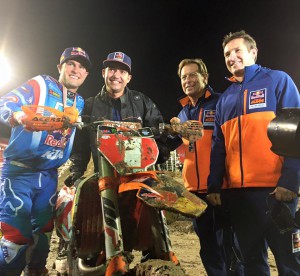 There is always a lot of excitement with the final Supercross race of the season, but this year's Las Vegas race proved to be exceptionally special not only because of the first place winners, but because there were several significant firsts, along with the number one regularly occurring throughout the evening.

To start, from what we can recall, since 1997 when Las Vegas became the location for the season finale, this was the first time in 20 years that the event was a mudder.

Even though reigning champion/number one plate holder, Ryan Dungey had already secured his third SX championship the weekend prior, the Red Bull KTM rider proved he's a die-hard competitor by slogging through the mud to lead the pack and cross the finish line first with a 12 second lead over Rockstar Energy/Husqvarna Factory Racing's Jason Anderson. While the win marked Dungey's ninth first place finish of the season it was the 31st of his career.

This was the first time the Dave Coombs Sr. 250 East/West Shootout 250 offered points towards the east coast/west coast championships. 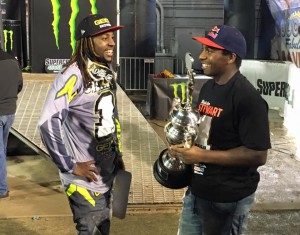 Geico Honda's Malcolm Stewart piloted his CRF 250R to win the 250 East Championship, the first major championship of his career.

Reigning 250 West champion/number one plate holder Cooper Webb was competing with a broken wrist but still managed ride his Yamaha YZ 250F to a mid-pack finish. Webb's 11th place finish helped him secure his second West Regional Championship in a row, with a one point margin over Monster Energy/Pro Circuit/Kawasaki's Joey Savatgy.

Webb's win made him the first rider since Justin Barcia in 2011 and 2012 to win back-to-back 250SX Class regional titles.