Triumph's 2016 Street Triple R is redefining what previous Triumph models had done to innovate the naked midsize category. This bike, while far lighter than its performance-focused counterpart, the Speed Triple, should be the top choice for any intermediate level thrill-seeker.

Due to its far lighter frame, the Street Triple R is more agile and handles better in urban environments than the Speed Triple variation. While both boast exceptional maximum torque capabilities, the Street Triple weighs in at 370.4 pounds; a bike simply too light to beat if you're after maneuverability. This update comes as a much-needed refresher to Triumph's previous 2007 introductory model. The motorcycle company conducted a secret survey of previous Street Triple owners, and through data gathered, implemented changes and updates to the '07 model in an effort to give their customers what they wanted. Details of this survey, as well as spy shots of Street Triple prototypes were leaked online early in 2015, adding to the anticipation and general excitement for Triumph fans.

Now, without further adieu we've got the rundown on what to expect from Triumph's 2016 Street Triple R motorcycle.

The 2016 Street Triple R comes standard with a 675 cubic centimeter, liquid cooled, 12 valve, inline three-cylinder engine, complete with multipoint sequential electronic fuel injection. The transmission gearbox is a standard six speed with a wet, multi-plate clutch. Bore and stroke are 74 millimeters by 52.3 mm respectively. Torque is reported to max out at 106 horsepower while moving at 11,850 revolutions per minute, according to Triumph. The total maximum compression capable from the 2016 Street Triple R equates to 12.85:1.

A rider sits atop the 2016 Triple R at a height of 32.3 inches from the pavement. The bike features a wheelbase of 55.5 in, a rake of 23.4 degrees and a trail of 3.7 in. With an empty tank, the bike weighs 370.4 pounds, with a total fuel tank capacity of 17.4 liters. The Triumph Street Triple R is rated to achieve an average of 43.1 U.S. miles per gallon in urban environments. At a constant speed of 56 miles per hour, the bike is capable of reaching upwards of 57.3 mpg.

All dashboard displays are featured in vibrant liquid crystal display. The digital readouts features a trip counter, digital speedometer, fuel gauge, gear position (plus programmable gear change lights), clock, and ABS switch displays. Color options to be available will be crystal white, matte graphite and matte phantom black - all which feature a ruby-red engine side plate, undercarriage and thin rings on both front and back wheels.

According to Triumph, the 2016 Street Triple R will be commercially available in May, and will be listed at a base price of $10,400. 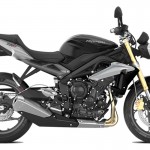 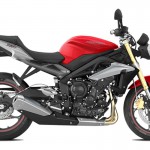 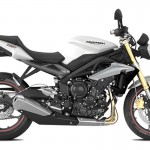 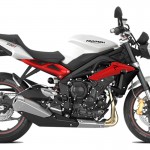 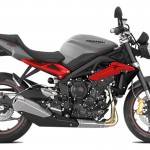 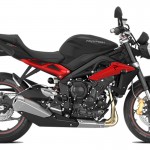 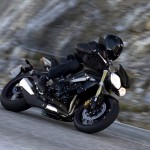 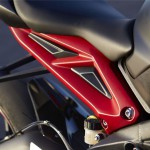 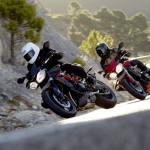