Speed Demons: A Brief History Of Motorcycle Racing Since 1897

Many riders today enjoy the wind in their hair, the smell of early-morning bike exhaust and tinkering with the toys that make people go fast. However, few riders today know the story of how their favorite motorsports came to be. The following is a summary of motorcycle racing history, with its rich and colorful origins around the world: 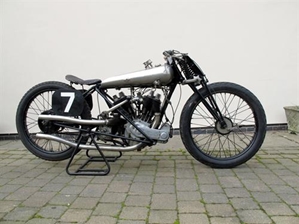 Since the days of black-and-white film, motorsports have existed. Once people first discovered how to build proper combustion engines, they began attaching wheels and trying to extract as much raw power as possible. Both defying gravity, and going really fast seem to be undying sources of entertainment , and since 1897, people have been racing what is known today as sport-class motorcycles.

The first popular prototype was the de Dion tricycle, which sprung out from small town automobile road racing in France. The Dion came out of the classic Paris-Vienna race, but was quickly overshadowed by the two-wheeled Werner models, according to Encyclopedia Britannica. It wasn't until after the turn of the century that the Europeans formed the FÃ©dÃ©ration Internationale du Motocyclisme, today called the FÃ©dÃ©ration Internationtale Motocycliste. After World War II, FIM's membership expanded to include Germany, Austria, Britain, France and Denmark.

Americans began racing bikes in the late 1800s as well, but it wasn't until Harley-Davidson debuted in 1903 - just two years after an introduction of the single-cylinder, 1.75-horsepower Indian in 1901 by the Hendee Manufacturing Company - that a formal enthusiast's organization was formed. The premier motorsports interest organization at the time, the New York Motorcycle Club, met to discuss interest in the rapidly forming international sport. The club quickly realized that traction was being made with the American public, and on Sept. 7, 1903, the Federation of American Motorcycling was formed consisting of only 93 original enthusiasts membership pledges, according to American Motorcyclist Association.

By the 1920s, motorcycle racing had successfully stretched coast to coast in the United States. After a brief pause during World War II (which made rationing of both gasoline and heavy metals necessary for the war effort) full-scale motorcycle racing had launched itself into a golden age of motorsports still going on today.

While FAM existed for only 16 years, the organization was soon reborn under a new name, the American Motorcyclists Association and thrived through the 1920s. Despite popularity on the East Coast however, the very first wooden board track was built not in New York, but in Los Angeles. By the 1920s, motorcycle racing had successfully stretched coast to coast in the United States. After a brief pause during World War II (which made rationing of both gasoline and heavy metals necessary for the war effort) full-scale motorcycle racing had launched itself into a golden age of motorsports still going on today.

The early days of track racing sprung many variants along the way. Today, you can find various types of motorbike racing, including: