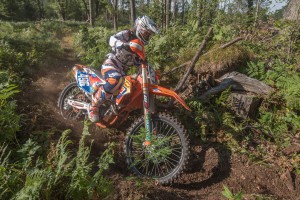 Martinez admitted she was nervous heading into the event not quite sure what to expect. Her first test was her worst test of the day as she got all the nerves out of the way. After the opening test she was able to stay inside the top three on the remaining special tests. She took the win on the final test to clinch the overall victory for the day.

"I'm so glad I have such a great crew and teammates around me that gave me helpful advice for my first enduro race," stated Martinez. "The trail was definitely tighter than I was used to but the format was very fun. I am really happy to get the win today but know that I have to get a little more comfortable in the tight trees before coming back for another one."