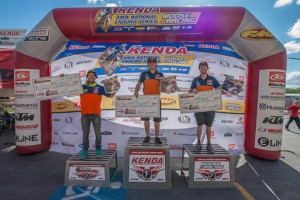 FMF KTM Factory rider Kailub Russell took his second win of the season at the Inyan Kara National Enduro, the sixth round of the AMA Kenda National Enduro Series, to further increase his lead in the championship standings.

Russell topped the board twice during the day finishing first on test one and test three. He finished in the runner-up spot on the remaining three tests (the fifth test was thrown out due to excessive mud). His consistency paid off and allowed him to walk away with an easy win nearly two minutes ahead of the second place ride of his teammate Russell Bobbitt.

Bobbitt also took two test wins on the day in tests two and four. Unfortunately, his fourth place finishes in test one and six caused him to fall behind Russell and he was unable to close the gap. Fellow KTM rider Ian Blythe held on for third to round out the podium and make it a KTM podium sweep for the day.

"I was pretty comfortable all day," stated Russell after his win. "It was muddy in places but overall a pretty fun place to ride. My KTM had no issues throughout the day and I felt confident in each test."

Now six rounds into the series, Russell holds a 28 point lead in the championship standings over Bobbitt and KTM support rider Steward Baylor.